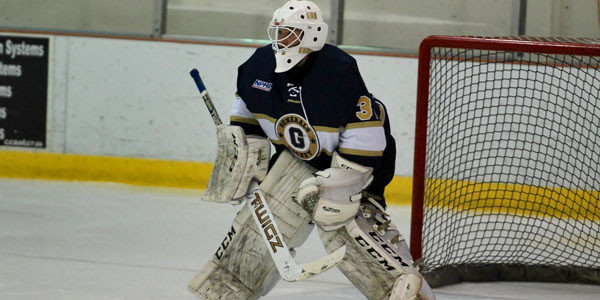 Wearing their pink jerseys in honor of Breast Cancer Awareness Night presented by HSI, the Generals only got one goal against Outlaws goalie Titan Greer, who had a career night between the pipes. Facing a whopping 60 shots from the Generals, Greer recorded 59 saves, including 27 in the final period alone.

After seventeen minutes of scoreless action, the Outlaws scored first when Colton Symbol lit the lamp at 17:17. Aaron Questad assisted on Symbol’s goal to give Tri-Cities a 1-0 lead.

That 1-0 lead would disappear quickly though, as the Generals tied the game at one with a minute left in the first period. Logan Sanders scored for the second straight night, with Cole Bloemer providing the assist on the Generals’ lone goal of the contest.

The second period did not see any scoring, as neither team could not break the 1-1 deadlock. Eugene outshot Tri-Cities 14-4 during the period.

Questad would be the one to break the tie, scoring the team’s go-ahead goal 3:14 into the third period. Recording his second point of the night, Questad’s score was unassisted.

With two power play opportunities in the final four minutes, the Generals tried to tie the game with shot after shot. Despite having the extra attacker on the ice by pulling their goalie, the Generals could not get the puck behind Greer of Tri-Cities, and thus were dealt their second loss of the season.

Starting in net for the second straight night, Generals goalie Chris Pritchard once again allowed just two goals during the sixty minutes of play. This time, however, he would not get the win despite saving 22 of 24 shots from the Outlaws.

The Generals begin their four-game road trip next weekend, when they travel to face the Bellingham Blazers next Friday and Saturday night on their home ice. Both games begin at 7:35, and fans can follow the action on Pointstreak or Fast Hockey.