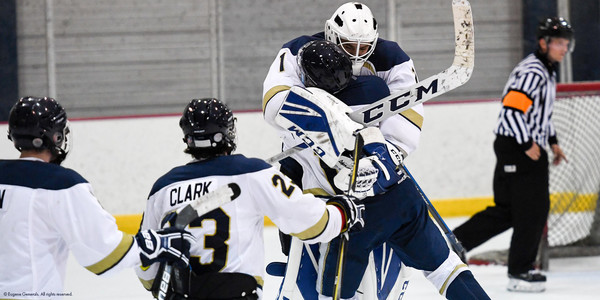 The Eugene Generals wrapped up the 2018-19 season in style by netting a 6-5 win over the Portland Jr. Winterhawks on Saturday night to secure a series sweep on home ice.

Eugene entered Saturday aiming to finish the season on a high note after earning a 4-2 win over the Jr. 'Hawks the night prior, and early in the first period it appeared that they were on their way towards doing so.

With exactly six minutes off the clock in the opening period, second-year forward Alex Clark potted his 23rd goal of the season with a well-placed, hard wrist shot after going coast-to-coast to give the Generals the game's first lead.

The Gens carried the 1-0 lead into the first intermission, but it lasted only 29 seconds into the second period as Portland's Roberto McCormack leveled the score at 1-1 with fans still getting settled back into their seats.

Generals forward Cody Arbelovsky responded less than four minutes later to regain the lead for the Generals with his 20th goal of the season, but just eight seconds after the ensuing draw Portland's Jakub Krncok leveled the score once more, this time at 2-2.

That cushion was short-lived, though, as Portland's Mack Ashbaugh scored with just before the break to send the visiting Jr. 'Hawks to the locker room trailing by just one.

Eugene's lead went back to two near the midway point of the third period when Clark netted his second goal of the game, this time on a hard one-timer off a well-placed feed from Griffin Minchin.

Clark's goal proved to be pivotal as Portland would quickly responded again, this time thanks to McCormack once more who netted his own second goal of the evening just 82 seconds after Clark's strike.

That set up a tense and at often times frantic final ten minutes of regulation, including a mad scramble in front of the Generals net in the game's waning seconds, but Eugene netminder Carson Roisum shut the door the rest of the way to earn the win and secure the sweep in the season's final series.

After an emotional postgame scene with Generals players and staff, the Gens now look ahead to one final team skate together on Sunday morning before the season 'officially' concludes.

The Eugene Generals offer a sincere, heartfelt thanks to all that made the fourteenth season of Generals hockey possible.