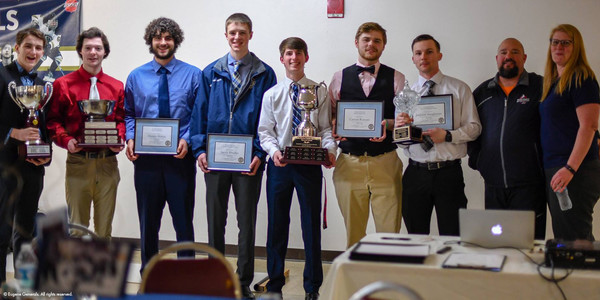 Yearly honors were handed out on Wednesday evening when the Eugene Generals hosted the team's annual awards banquet at The Rink Exchange in Eugene, Oregon.

More than 80 players, staff members, volunteers, host families, and fans together celebrated another memorable season of Generals hockey by honoring the season's standout performers both on and off of the ice.

A total of ten awards were handed out at the 2019 Eugene Generals Awards Banquet. The Generals introduced a new award - the Academic Excellence Award - while also rebranding a pair of already existing awards to honor members of the Generals family. 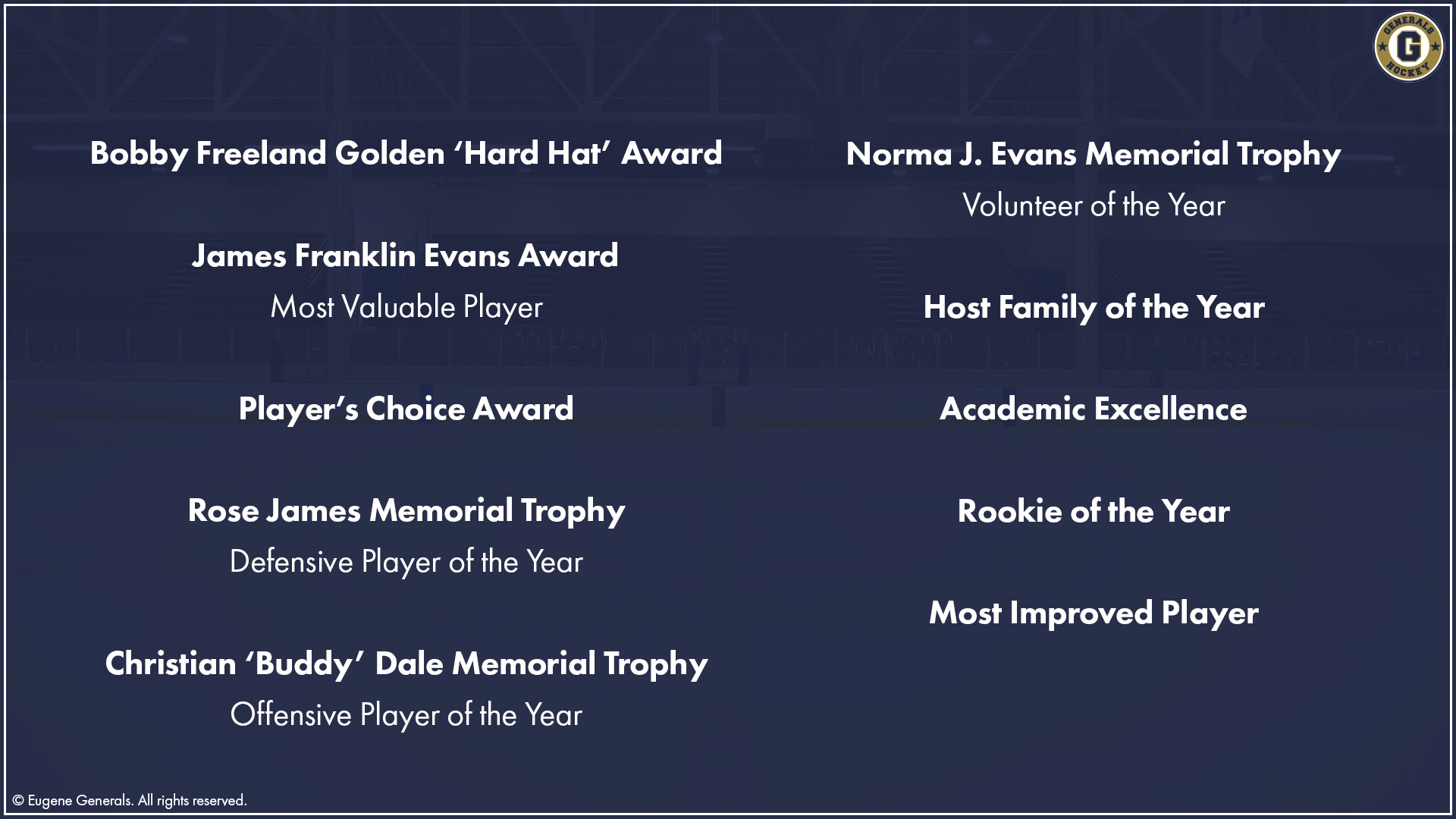 A total of ten awards were handed out at the 2019 Eugene Generals Awards Banquet, a number of which have been named in honor of Generals family members throughout the team's fourteen years of existence.

The Offensive Player of the Year Award has been officially renamed as the Christian 'Buddy' Dale Memorial Trophy in honor of former Generals captain and three-year veteran (2013-16) Christian 'Buddy' Dale who tragically passed away in 2018. Similarly, the Defensive Player of the Year Award will be represented by the Rose James Memorial Trophy in honor of Rose James, a former security guard and volunteer for the Eugene Generals.

Generals forward Jared Coday was the only person to claim multiple awards on the evening, taking home the Rookie of the Year Award and the Christian 'Buddy' Dale Memorial Trophy. 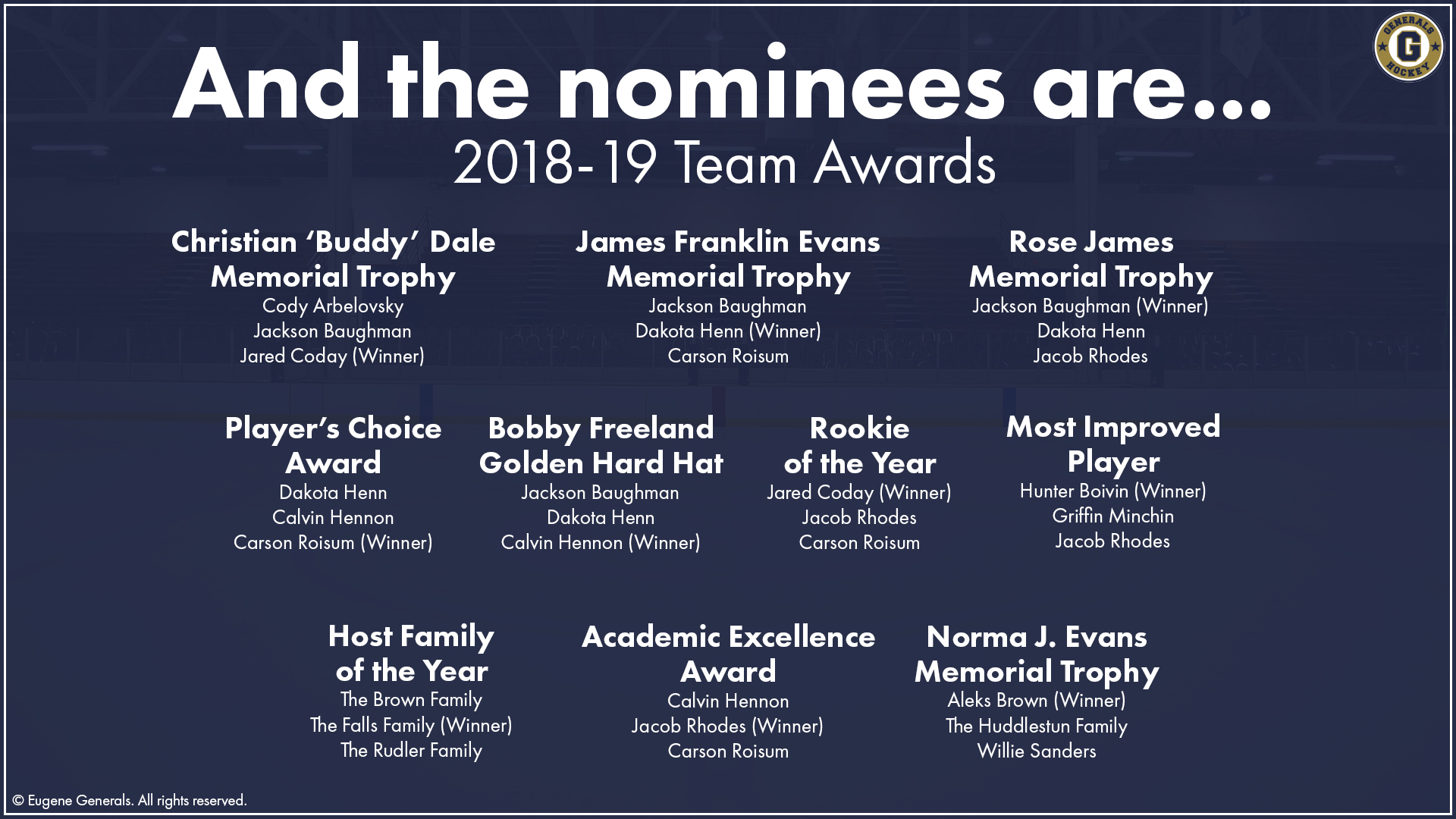 "It was a special night for all of us involved," said Generals GM Alex Stimson. "It's bittersweet, in a way, because the awards banquet is an annual reminder that another season of Generals hockey is nearing its end, and this season has been full of many great memories and relationships. Top to bottom, this year's roster is full of truly exceptional young men, and the people that were in the room for our awards banquet all help play a part in helping those young men develop in all facets of life, not just hockey. It was wonderful to get so many members of our Generals family together to reflect on another great season while also honoring those that went above and beyond."

The Generals will conclude the 2018-19 season this weekend with a two-game series against the Portland Jr. Winterhawks. The series is scheduled for Friday and Saturday night at The Rink Exchange, located on the Lane County Fairgrounds. Both games are scheduled to start at 7:30pm PST and tickets are available online at EugeneGenerals.com.