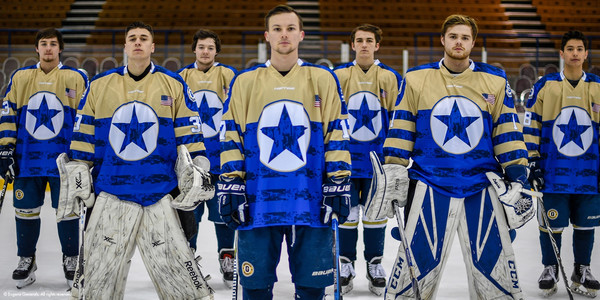 Eugene will open the season's final series paying homage to the brave men and women of our nation's armed forces once more. For the second consecutive year, the Generals collaborated with Harrow to develop one-of-a-kind, military-inspired sweaters.

Upon a closer look, one will also find subtle digital camouflaging that has been worked into the blue areas of the jersey. An American flag has been placed over the heart of the jersey while the Generals logo is found on top of both shoulders.

"We're incredibly proud and honored to salute the servicemen and servicemen of our nation's military, including our own assistant coach Daniel Gomez who currently serves within the United States Marine Corps Reserve," says Generals GM Alex Stimson. "It's a small way for our organization to profess our sincere gratitude towards those who have made the ultimate sacrifice and those that continue to put themselves in harm's way for our safety."

All active duty military and veterans receive free admission to Friday's game upon presenting valid military identification. The Generals and Jr. Winterhawks face off Friday, March 15 and Saturday, March 16 in the final two games of the 2018-19 season. Tickets are on sale now at EugeneGenerals.com.