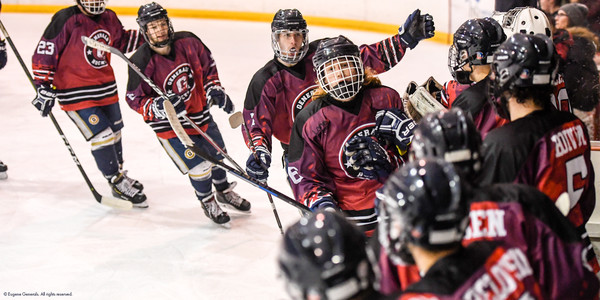 In front of a massive crowd at the Rink Exchange on Saturday night, the Eugene Generals (12-18-1-0-2) fell in a shootout to the Oregon Ducks by a final score of 3-2.

Sporting specially-designed ‘zombie’ jerseys to commemorate the upcoming Eugene Generals Blood Drive, the Generals hit the ice on Saturday night to face off against the Ducks for the fourth and final time this season. Oregon entered the matchup fresh off winning the PAC-8 Conference championship the weekend prior, the team’s first conference title since the 2008-09 season.

Neither side was able to light the lamp in the first twenty minutes as both goaltenders turned away every shot faced. Generals goaltender Carson Roisum stopped nine shots in the period while Oregon goaltender Grayson Parkes turned away eleven.

In the second period, the Ducks broke the scoreless deadlock to take the game’s first lead. Sophomore forward Connor Rendell put Oregon in front at the 14:16 mark of the period after finding himself all alone in the low slot before promptly burying a well-placed wrist shot past Roisum to give the Ducks a 1-0 advantage.

The Ducks' lead lasted five minutes until a local product leveled the score for the Generals. Springfield-native and former Jr. General Griffin Minchin tied the score at 1-1 at the 9:06 mark on a strong second effort after initially being turned away by Parkes, Minchin's 10th goal of the season and fifth goal over the past five games.

However, Rendell and the Ducks were heard from again before the second intermission. Rendell tallied his second goal of the game after a mad scramble that led to Roisum being caught out of his net and Rendell burying a tap-in goal to put Oregon back in front, 2-1, with 4:45 left in the period.

Oregon held their one-goal lead well into the third period as both goaltenders continued to turn away quality chances, but a penalty in the final four minutes of regulation proved pivotal. After neither team was able to capitalize on any power play opportunities in the game's first 57 minutes, Eugene capitalized on a Harrison Kass boarding penalty when Alex Clark re-directed a Cody Arbelovsky shot past Parkes to tie the game at 2-2 and send The Rink Exchange crowd into a frenzy.

Neither side was able to score during the ensuing five-minute overtime period, leading to a five-man shootout. In the shootout, the Ducks scored on two of four opportunities while the Generals were unable to beat Parkes to wrap up a 3-2, shootout win for Oregon.

Generals goaltender Carson Roisum stopped 39 of 41 shots faced in an impressive effort despite the final result.

A crowd of 1,011 fans were in attendance for Saturday night's game between the Generals and Ducks, the largest crowd for any event at The Rink Exchange in recent memory.

Eugene now looks ahead to a busy bye weekend when they host the 4th annual Eugene Generals Blood Drive on Saturday, February 23 from 1-4pm at The Rink Exchange.

Fans that donate blood at the Eugene Generals Blood Drive will be entered into a raffle for a one-of-a-kind Generals ‘zombie’ jerseys. You can reserve your time to donate at LaneBloodCenter.org.

The game-worn 'zombie' jerseys are also available for purchase via online auction at EugeneGenerals.com/auction. The auction concludes on Saturday, February 23 at 7:30pm PST.

Saturday, February 23 also brings Try Hockey For Free Day where children ages 4-9 can enjoy their first hockey experience with no cost associated. Gear will be provided to all children that participate and the Eugene Generals will be on hand providing on-ice instruction and assisting in the day's festivities.

Spots are limited at Try Hockey For Free Day. Register your child in advance by visiting TryHockeyForFree.com.