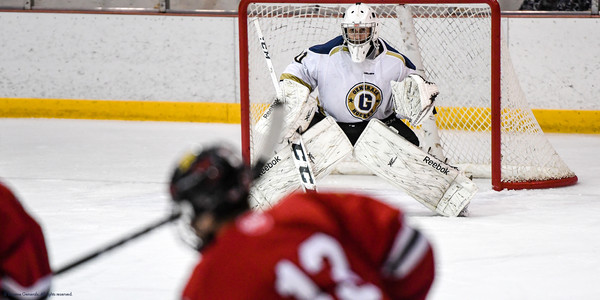 The Eugene Generals (12-18-0-1-1) completed a two-game sweep of the Portland Jr. Winterhawks on Sunday morning thanks to a 6-0 win at Sherwood Ice Arena in Sherwood, Oregon.

Just hours removed from an 8-2 victory over the Jr. 'Hawks the night prior, the Generals looked to head home on Sunday with their third consecutive win and their sixth victory since the new year.

With less than two minutes off of the clock in the second period, Generals defenseman Dakota Henn scored his 17th goal of the season to make it a 3-0 game, and Henn scored again at the 6:58 mark to stretch Eugene's advantage to four.

Travis Manthe added one more for the Generals before the break with a goal at the 1:56 mark of the period, his second of the season, to give the Gens a 5-0 lead heading into the final period.

Klamath Falls native Hunter Boivin netted the only goal for either team in the game's final twenty minutes to cap a 6-0 win for Eugene.

With two more goals this morning, Dakota Henn has now scored nine goals over the past eleven games. The Colorado Springs native posted two goals in each of the team's victories against Portland this weekend.

Meanwhile, Jared Coday has now scored in seven of the team's past eight games, tallying seven goals over that span.

The Generals now return home to face off against the PAC-8 Conference champion University of Oregon Ducks on Saturday, February 16. The Generals won the most recent meeting between the two teams, a 5-3 victory at The Rink Exchange on February 1, and the Gens have won two of three meetings against the Ducks this season.

The Generals will be wearing one-of-a-kind 'zombie' jerseys against the Ducks to commemorate the upcoming Eugene Generals Blood Drive on February 23.

Tickets to Saturday's game can be purchased online at EugeneGenerals.com or in-person at The Rink Exchange starting approximately one hour prior to game time. Tickets are $10 for general admission, $6 for seniors/students, and children under the age of five are free.

The Eugene Generals Hockey Network will provide a live, free stream of Saturday's games via YouTube Live. Remember to subscribe to the Eugene Generals on YouTube to stay up to date ahead of each EGHN broadcast.