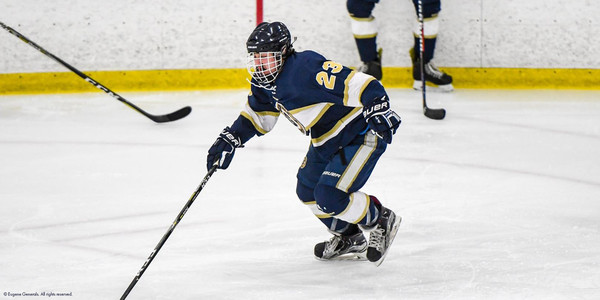 The Eugene Generals (11-18-0-1-1) netted an 8-2 win over the Portland Jr. Winterhawks on Saturday night at the Winterhawks Skating Center in Beaverton, Oregon in the first game of a two-game, weekend series.

Eugene entered the night bolstered by an impressive win in the team's prior game, a 5-3 'road' victory over the University of Oregon in which the Gens never trailed at any point, but it was Portland who took the game's first lead on Saturday night with a goal at the 13:07 mark of the first period.

Generals second-year forward Alex Clark leveled the scored at 1-1 shortly after the midway point of the first with an unassisted goal at the 2:04 mark of the period, his 18th of the season, and six minutes later, Clark was heard from again. Assists from Griffin Minchin and Travis Manthe helped Clark tally his second goal of the night at the 2:04 mark and put the Gens ahead, 2-1.

It became 3-1 with less than one minute left in the period when Dakota Henn scored his 15th goal of the season just 13 seconds into a Generals power play opportunity, and Eugene carried that two-goal advantage into the first intermission.

Clark completed his hat trick early in the second period when he scored at the 14:46 mark to make it a 4-1 game, and just 21 seconds later Dakota Henn scored his second goal of the night and seventh goal over the past ten games to quickly put the Gens in a comfortable lead at 5-1.

The Generals attack struck two more times before the second intermission with goals from forward Cody Arbelovsky at the 11:45 mark and later from Jared Coday at the 5:49 mark to take a 7-1 advantage into the locker room.

It took less than one minute into the third period for the Generals attack to be heard from again when Coday netted his team-leading 25th goal of the season and second goal of the night with just 56 seconds off of the clock.

Portland struck again at the 10:07 mark of the period with their second goal of the night, but it proved to be the final goal for either side at the Generals netted an 8-2 win to open the two-game series.

The Generals and Jr. Winterhawks conclude their two-game series on Sunday morning at 8:05am PST at Sherwood Ice Arena in Sherwood, Oregon.

No video broadcast will be available for Sunday's game, so stay tuned to Twitter and Facebook for updates and information regarding this weekend's games.

Inclement weather is also expected in the Portland area throughout the weekend. Stay tuned to EugeneGenerals.com as well as Facebook and Twitter for any updates regarding potential changes of game times or locations.