In-State Showdown On Tap In Portland 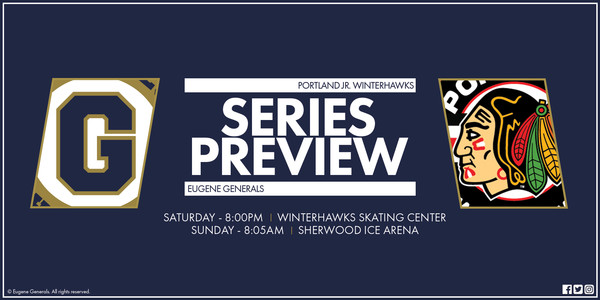 The Eugene Generals will trek north this weekend to play a two-game series against the Portland Jr. Winterhawks at the Winterhawks Skating Center in Beaverton, Oregon and the Sherwood Ice Arena in Sherwood, Oregon.

However, an energized Eugene squad will be making the trip to the Rose City fresh off of an impressive 'road' win over the University of Oregon, a 5-3 victory that saw the Gens play one of the team's most impressive and well-rounded performances of the season.

Generals netminder Carson Roisum posted a 42-save performance last Saturday against the Ducks while Cody Arbelovsky, Dakota Henn and Griffin Minchin each posted multi-point games. Minchin enters the series against Portland with four goals over the past two games while Henn has scored in five of ten games since the turn of the new year.

No video broadcasts are anticipated from the Jr. Winterhawks this weekend, so stay tuned to Twitter and Facebook for updates and information regarding this weekend's games.

Inclement weather is also expected in the Portland area throughout the upcoming weekend. Stay tuned to EugeneGenerals.com as well as Facebook and Twitter for any updates regarding potential changes of game times or locations.