Gens Down Ducks In Another Wild Rivalry Matchup 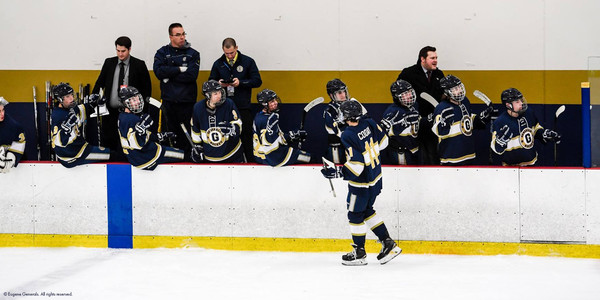 Friday night gave Emerald Valley hockey fans another classic. The Eugene Generals (10-18-0-1-1) topped the University of Oregon Ducks (17-6-0-2) by a final score of 5-3 on Friday night at The Rink Exchange in Eugene, Oregon.

Facing off for the third time this season and the first time since September, the Generals and Ducks were welcomed to the ice at The Rink Exchange by a typically raucous crowd.

It didn't take long for the first goal to come on Friday night, and it came from a local product. Springfield native Griffin Minchin opened the scoring at the 15:58 mark after posting up just outside of the Oregon crease and quickly burying a perfect feed from Cody Arbelovsky to put the 'visitors' ahead. That wasn't the only time that Minchin would be heard from in the first period.

Five minutes later, Minchin doubled the Eugene lead. After a quick drop pass from Dakota Henn in the corner, Minchin fired a speculative shot from a tight angle that somehow, someway found the back of the net to put the Ducks in a two-goal hole with less than ten minutes off of the clock in the first period.

Both sides settled in for the remainder of the first period and well into the second period until a Eugene power play midway through the second. With the Ducks down a man, third-year veteran Cody Arbelovsky netted his 15th goal of the season on a hard wrist shot from the high slot that snuck over the shoulder of Ducks goaltender Jackson Howery and just under the crossbar to stretch the Gens' lead to three.

However, the Oregon attack wouldn't be held at bay much longer. With Eugene once again on the power play and looking to make it a 4-0 game, Ducks forward Jack Geraghty scored shorthanded to cut Oregon's deficit to 3-1 with only 58 seconds before the second intermission horn sounded.

As per usual between these two teams, the majority of the fireworks were saved for the final period of play.

Second-year forward Alex Clark restored the three-goal advantage for Eugene at the 16:30 mark of the third period on a quick, well-placed snap shot from the slot, and a Dakota Henn power play goal just 50 seconds later seemed to put the game out of reach with Eugene leading 5-1.

The Ducks wouldn't buy into that narrative, though. Still trailing, 5-1, midway through the period but on the power play, Geraghty struck for his second goal of the game to cut the margin back to three.

Two and a half minutes later, Geraghty completed his hat trick on another perfectly placed wrister to all of the sudden put the Ducks back within striking distance with more than seven minutes remaining in regulation.

Geraghty's third goal of the night proved to be the last for the Ducks, though. The Generals defense shut the door down the stretch to seal a hard-fought 5-3 win, the team's second win in three meetings against the Ducks this season.

Generals goaltender Carson Roisum stopped 39 of 42 shots faced to earn his second win against the Ducks in as many starts. Roisum has stopped 105 of 111 Ducks shots this season (.945 SV%).

Both teams will face off for the fourth and final time of the season on February 16 at The Rink Exchange in Eugene, Oregon. Tickets are on sale now at EugeneGenerals.com.

The Generals now look ahead to a two-game series in Portland next weekend against the Portland Jr. Winterhawks. The Gens and Jr. 'Hawks open the series on Saturday, February 9 at 8:00pm PST at the Winterhawks Skating Center. The series concludes the following morning at 8:05am PST at Sherwood Ice Arena.