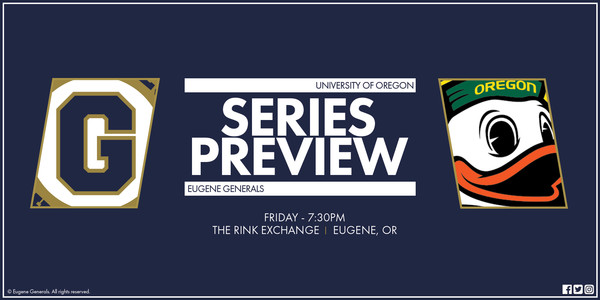 Friday's matchup will be this season's third meeting between both programs after they previously squared off for a two-game series back in September. Then, the Gens and Ducks each notched a win against one another with the Generals winning the first matchup in shootout fashion, 4-3, while the Ducks rolled in the second game, 7-1.

The Gens will hit the ice Friday eager to put last weekend's series in the rear view mirror. That series, a two-game tilt in Washington against the Seattle Jr. Thunderbirds, saw Eugene go winless (loss, tie) after winning all four of the team's previous meetings against the Jr. T-Birds.

Despite the loss, leading-scorer Jared Coday continued his hot start to 2019. The Irvine, California native scored in both of Eugene's games against Seattle and has now scored in four straight. Coday leads the team in goals (23) and overall points (36).

First-year forward Hunter Boivin will also look to continue what has been a strong start to the second half of the season. Boivin, a native of Klamath Falls, has tallied three goals in eight games since the turn of the new year after notching just one goal over twenty games during 2018.

Generals netminder Carson Roisum will aim to return to action this weekend after missing last weekend's series against Seattle due to illness. The Wisconsin native has been strong for the Generals during his first season in Eugene, including a 66-performance in his only previous meeting against the Ducks this season (W, 4-3).

Meanwhile, the Ducks enter the weekend winners of four straight, including a two-game sweep of the Washington Huskies last weekend to earn Oregon the I-5 Cup for the first time since the 2014-15 season. Oregon has won eleven of their past thirteen games with the two lone losses coming by just one goal each at the hands of Boise State.

A pair of Connors provide a bulk of the firepower for the Ducks attack. Second-year forward Connor Rendell leads the Ducks in most major offensive categories while former General Connor Hoernlein (2011-15) has been impressive in his first year with the team after previously suiting up for Boise State University. Forwards Jack Geraghty, Harrison Kass, and Austin Charnholm have also been top contributors to the Oregon attack.

In net, Noah Rosenberg and Eugene native Jackson Howery have tag-teamed the backup duties behind go-to netminder Grayson Parkes who has been superb in his first year with the Oregon program.

Oregon is currently ranked #12 in the ACHA's West Region, second only to Boise State (#4) among PAC-8 Conference teams.

Friday's game against the Generals will be Oregon's final contest before the upcoming PAC-8 Conference Tournament (February 8-10) in South Lake Tahoe, CA. The Generals and Ducks are currently scheduled to face off again shortly thereafter on Saturday, February 16 at The Rink Exchange in Eugene, OR.

Friday's game between the Generals and Ducks will be a 'home' game for the University of Oregon. Therefore, the Ducks will be overseeing and managing all aspects of gameday operations.

Tickets to Friday's game can be purchased in-person at The Rink Exchange starting approximately thirty minutes prior to puck drop. General admission is $10, students/seniors/veterans are $5, and children under the age of 10 are free.

A live broadcast of Friday's game will be available on Oregon Hockey Live via YouTube Live, the official coverage provider of Oregon Ducks Hockey.