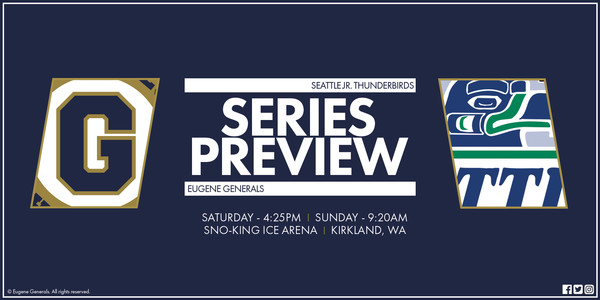 The Eugene Generals (9-17-0-1) will depart the Emerald Valley and head for the Emerald City this weekend where they will face off against the Seattle Jr. Thunderbirds (28-11-1) in a Saturday-Sunday series at Sno-King Ice Arena.

Eugene will be playing in its first action since the team's recent cross-country trip where they played three games against opponents from the Eastern Hockey League and the EHL's Premier Division. The Generals posted a 1-2 record over the three-game stretch on the East Coast.

Generals captain Jackson Baughman posted a team-high 4 goals during the Gens' recent trip, including the first hat trick of his junior hockey career (Jan. 16 vs. Philadelphia). The second-year defenseman has scored in four of the team's past five games, tallying 7 goals over that span.

Fellow second-year defenseman Dakota Henn also continued his strong start to 2019 scoring in two of the team's three games on the East Coast. Henn netted his first hat trick of the season back on January 12, a 9-3 win for the Generals over the visiting Jr. Thunderbirds.

The Generals enter the two-game tilt with the Jr. T-Birds having won all four of the previous meetings between the two teams this season. Most recently, the Generals swept a two-game series against the Jr. T-Birds just two weeks ago with wins by 9-3 and 4-3, both coming in Eugene.

However, odds are that Eugene will be facing a different-looking Seattle team than they have previously faced with the T-Birds having been plagued by injuries throughout much of the 2018-19 season.

Seattle is fresh off of a major trip of their own after spending Martin Luther King Jr. Day weekend in Las Vegas participating in the Las Vegas Invitational. The Jr. T-Birds handled all comers during their time in the desert going unbeaten in five games played (four wins, one tie) including a 5-2 win over the Vegas Jr. Golden Knights in the tournament's championship game.

Seattle forward Nate Harris led the tournament in points (11) while Alex Britten, Landen Shaw and Grayson Tymchyshyn each finished with a tournament-high 5 goals.

Saturday's game between the Generals and Jr. Thunderbirds is scheduled for 4:25pm PST while Sunday's game has an expected start time of 9:20am PST.