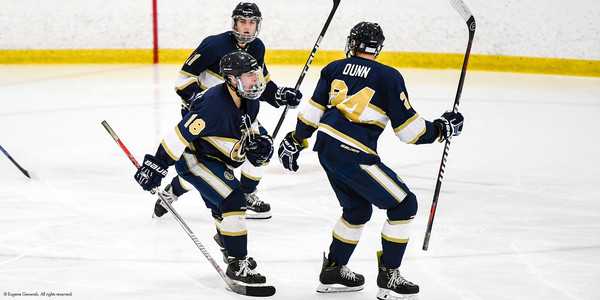 Talk about ending a big trip on a high note. The Eugene Generals (9-17-0-1) netted a come-from-behind, 6-3 win over the Philadelphia Jr. Flyers on Thursday afternoon in West Chester, Pennsylvania.

Playing in the final game of the team’s stretch of three games in three days against Eastern Hockey League and EHL Premier opponents, the Generals aimed to end the trip on a high note after falling to the Central Penn Panthers on Tuesday and the Connecticut Chiefs on Wednesday.

After just eight minutes of play on Thursday afternoon, it appeared that Eugene’s struggles from the prior two days had carried over as Philadelphia jumped out to an early 2-0 lead.

Jared Coday responded for Eugene at the 10:29 mark of the first period with his team-leading 22nd goal of the season, but Philadelphia answered three minutes later to restore their two-goal advantage, an advantage that they would carry into the first intermission.

In the second period, the Generals began to turn the tide. Just past the midway point of the period, Jared Coday cut the deficit back to one with a creative finish from a tight angle, his second goal of the game. Three minutes later, the game was all tied up. Generals captain and second-year defenseman Jackson Baughman continued his recent goal-scoring streak and tied the game at 3-3 with a tap-in finish on the backdoor of the Philadelphia net after a perfectly placed cross-ice pass from Dakota Henn.

In the third period, the Generals took control and did not look back. Baughman gave Eugene their first lead of the game at the 15:34 mark when he netted his second goal of the game on a hard wrist shot with the Generals entering the Philadelphia defensive zone on a four-on-one opportunity.

Both sides traded chances over the next ten minutes of play with Generals goaltender Carson Roisum coming up clutch for Eugene with a handful of big saves in big moments.

With less than five minutes left in regulation and each team with a man in the penalty box, the Generals got the insurance they were looking for. Cody Arbelovsky and Jared Coday teamed up to create a candidate for goal of the year on a well-executed give-and-go that culminated in Arbelovsky finishing from point-blank range to put the Generals ahead by two. Just nine seconds later, Baughman completed his first-ever hat trick after collecting the ensuing draw, entering the Philly defensive zone and calmly finishing past the Jr. Flyers netminder to put the game out of reach and seal a 6-3 win.

The Gens will make the cross-country trip back to Oregon on Friday afternoon. Upon the team’s return to the Emerald Valley, the Generals will prepare for a two-game series against the Seattle Jr. Thunderbirds in Kent, Washington on January 26 and 27.