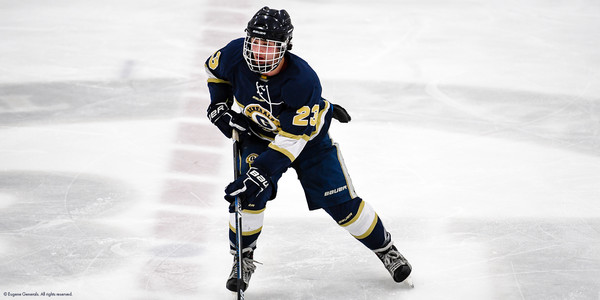 The Eugene Generals (8-16-0-1) fell to the Central Penn Panthers on Tuesday afternoon by a final score of 7-2 at Regency Ice Rink in Lancaster, Pennsylvania.

After spending most of the previous day making the cross-country trek from Oregon to the East Coast, the Gens hit the ice on Tuesday afternoon playing in the first game of a three-games-in-three-days stretch against opponents from the Eastern Hockey League and the EHL's Premier Division.

Less than 48 hours prior to the puck dropping in Lancaster, the Generals completed a two-game sweep of the Seattle Jr. Thunderbirds with a 9-3 win on Saturday night followed by a thrilling 4-3 win on Sunday morning.

In the first period of Tuesday's matchup, it appeared the momentum from the prior weekend's wins had carried over to the East Coast. Eugene controlled much of the game's opening minutes, but the Panthers struck first eight minutes in to take a 1-0 lead.

Central Penn's advantage lasted until 9:13 left in the period when second-year defenseman Dakota Henn snuck a seeing-eye shot through traffic and past Panthers netminder Steve Sanders to tie the game at 1-1.

The Panthers responded less than two minutes later, though, to retake the lead thanks to a power play goal, and they would double their lead moments ltater to make it 3-1.

Eugene responded with a power play goal of their own with 4:17 remaining in the period when captain Jackson Baughman walked in from the left dot and buried a bar-down finish past Sanders to put the Generals back within one.

However, Central Penn regained a two-goal advantage with less than one minute on the clock to carry a 4-2 lead into the intermission.

After an even first period that saw the Panthers best the Generals, 13-12, in shots, Central Penn put their foot on the gas in the second period. The Panthers outscored the Generals, 3-0, in the final 25-minute period to net a 7-2 win over the visiting Gens.

Tuesday's game between the Generals and Panthers featured a showcase format of two, 25-minute period as opposed to three, 20-minute periods.

The Generals will look to bounce back on Wednesday when they make the long trek north to take on the Connecticut Chiefs in Newington, Connecticut. Stay tuned to the Generals' social media channels for updates and information regarding a potential game broadcast.