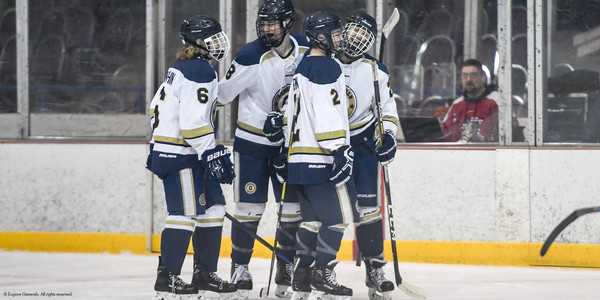 Unbelievable. That’s all that can be said after two goals in the final 34 seconds of action gave the Eugene Generals (8-15-0-1) a 4-3 comeback win over the Seattle Jr. Thunderbirds.

The puck dropped on Sunday morning, roughly 12 hours after the Gens 9-3 win on Saturday night concluded. Despite the early start, the Generals looked alive and well right out of the gates. Eugene’s offense picked up right where they left off, when Cody Arbelovsky scored on the power play to give the Gens a 1-0 lead less than one minute into the game.

After allowing the early goal, the Jr. Thunderbirds clamped down defensively. Seattle’s Garret Powers evened the score at 1-1 with a power play goal of his own with 8:48 remaining in the first period. Just as they did on Saturday, both teams took a 1-1 score into the first intermission.

Both teams remained stuck at one goal apiece until the Jr. Thunderbirds’ Matthew Butson scored with 10:55 remaining in the second period to give Seattle a 2-1 advantage, their first lead of the game.

Hunter Boivin entered the weekend with just one goal on the season, but had himself a series versus Seattle. Following a goal on Saturday, Boivin again found the back of the net on Sunday, scoring with under three minutes remaining in the second period to knot the score at two.

Heading into the second intermission tied at two, Eugene found themselves trailing early into the third period when Powers scored his second goal of the game to give Seattle a 3-2 lead.

The early goal by Seattle set the pace for most of the remainder of the final period of action, as the Jr. Thunderbirds controlled the tempo, killing a late Eugene power play and looking poised to come away with the series split.

That was, though, until absolute madness ensued at The Rink Exchange.

With 34 seconds remaining in the game, Alex Clark found the back of the net to even the score at three.

That wasn’t it. Following the game-tying goal, Eugene applied the pressure in the final seconds, and it wasn’t until the final second that Jackson Baughman scored to give Eugene the 4-3 win and send the Gens fans in attendance to their feet.

Skyler Larsen got the start in net for the second consecutive game and recorded 21 saves. The Generals outshot the Jr. Thunderbirds 31-24.

The comeback win gives the Generals a perfect 4-0 record over the Jr. Thunderbirds on the season, with two more games scheduled in Seattle on January 26-27.

Up next for Eugene is a cross-country trip to face off against opponents from the Eastern Hockey League (EHL) for the second time this season.