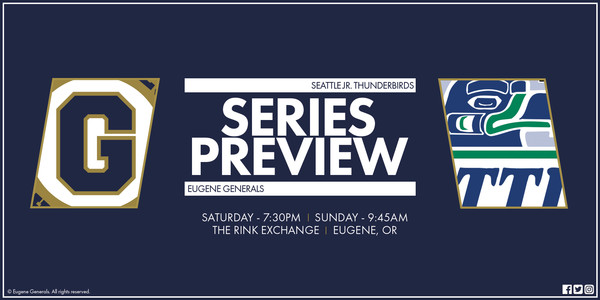 The Eugene Generals (6-15-0-1) are set to resume play this weekend when the team welcomes the Seattle Jr. Thunderbirds to the Emerald Valley for a two-game, Saturday-Sunday series at The Rink Exchange.

Following a hard-fought series versus the Portland Jr. Winterhawks that saw Eugene drop two close games, the Generals hit the ice again this weekend, looking to get in the win column for the first time in 2019.

The upcoming two-game series between the Generals and Jr. Thunderbirds will be the third and fourth meetings of the season between the two programs. Eugene had Seattle’s number in the beginning of December, sweeping the Jr. Thunderbirds with impressive 6-0 and 9-2 victories, which featured a four-goal performance from Cody Arbelovsky and hat trick from Jared Coday, respectively. With the Generals looking to snap its five-game losing streak, they hope to spark some of that same magic again this weekend versus Seattle.

Third-year forward Cody Arbelovsky continues to fill up the stat sheet for the Gens, tallying nine goals in his past seven games. In net, first-year netminder Carson Roisum will look to continue his strong season and translate it into his first win of 2019. Roisum, who is scheduled to start on Saturday, has compiled a .912 save percentage through 16 games played.

The matchup against the visiting Jr. Thunderbirds continues this season's slate of games against elite 18U opponents as the 2018-19 schedule features a wide array of Tier III junior, ACHA collegiate, and 18U opponents, a diverse schedule format that can be likened to that of USA Hockey’s National Team Development Program (NTDP).