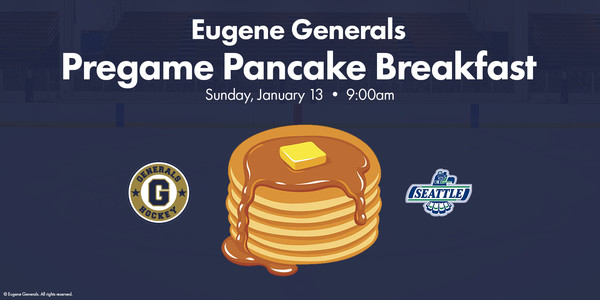 Hotcakes and hockey headline Sunday morning at The Rink Exchange. The Eugene Generals will host an all-you-can-eat pancake breakfast on Sunday, January 13 at 9:00am PST prior to the team’s series finale matchup against the visiting Seattle Jr. Thunderbirds.

To celebrate a rare Sunday morning game, Generals staff members will be firing up the griddle and serving pancakes all morning long leading up to the final game of a two-game series between the Generals and Jr. Thunderbirds.

Fans are encouraged to come feeling comfy and cozy wearing their favorite pajamas.

The pancake breakfast is scheduled to start at 9:00am and the puck will drop between the Generals and Jr. Thunderbirds at 9:45am.

The two teams will also face off the night prior with a scheduled start time of 7:30pm on Saturday.