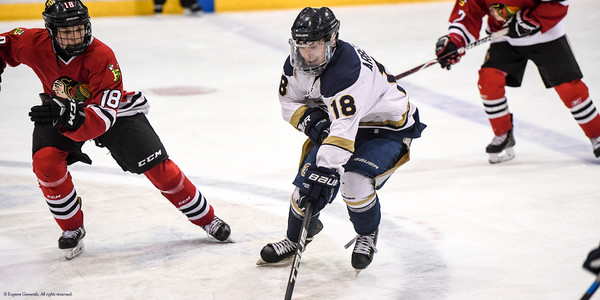 Searching to split the two-game series after falling, 2-0, the night prior, the Generals hit the ice Saturday night in front of another packed house, including a large contingency of members of the RHL, the adult hockey league based out of The Rink Exchange.

After a low-scoring affair on Friday between the two teams, Saturday's matchup proved to be quite the opposite. Eugene took the game's first lead near the midway point of the first period when second-year defenseman Dakota Henn rifled home a power play goal to give the Gens their first lead of the series.

Portland responded to level the score shortly afterwards, but Eugene regained the lead with nearly three minutes left in the period when second-year forward Alex Clark netted his thirteenth goal of the season from a tight angle at close range.

However, Portland was heard from again before the break. The Jr. Winterhawks leveled the score at 2-2 just before the intermission to send both teams to the locker room tied at two goals apiece.

A wild first period proved to be only a precursor to an even wilder second period. Local product Calvin Hennon put Eugene in front for the third time of the night on a well-played redirection in front of the Portland net, but Portland responded again soon afterwards to tie the game at 3-3.

Later in the period, Clark pounced on a breakaway opportunity to bury his second goal of the game and put the Gens back in front, 4-3, but the Jr. Winterhawks answered once more when they leveled the score at 4-4 near the midway point of the second period.

Third-year forward Cody Arbelovsky gave Eugene's their fifth lead of the night later in the period with his ninth goal in seven games, but the Jr. Winterhawks answered again before the break to tie the game at 5-5.

In the third period, Portland would finally take their first lead of the game. After trading goals all night long, the Jr. Winterhawks jumped ahead, 6-5, early in the third period, and they would later make it a 7-5 lead with just over eight minutes left in regulation.

But Eugene would be heard from again. Local product Griffin Minchin became the fifth different General to score when he buried a loose puck caught in a net-front scrum to cut Eugene's deficit back to one.

Minchin's tally proved to be the final goal for either side, though, as the Jr. Winterhawks held off a late flurry from the Generals to earn a 7-6 win.

The Generals now look ahead to a two-game series against the Seattle Jr. Thunderbirds next weekend. The Gens and Jr. T-Birds face off at 7:30pm PST on Saturday, January 12 and at 9:45am PST on Sunday, January 13.

Sunday's game will be highlighted by a pregame pancake breakfast starting at 9:00am PST. All fans will valid game tickets are invited to join the Generals for free, all-you-can-eat pancakes prior to the game.

Tickets can be purchased online at EugeneGenerals.com or in-person at The Rink Exchange starting approximately one hour prior to game time. Tickets are $10 for general admission, $6 for seniors/students, and children under the age of five are free.