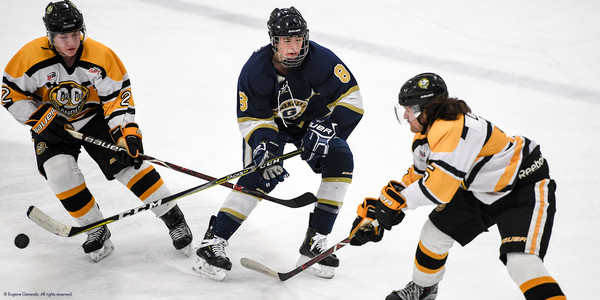 Skating in the early portion of the day after a late game the night prior, the Generals entered Day Two of the NA3HL Showcase looking to make amends for a frustrating 6-3 loss to the Wisconsin Whalers on Day One.

For the second consecutive day, the Generals got the start they were looking for. Eugene took the early 1-0 lead when second-year forward Broc Friesen pounced on a loose puck in the slot and potted a backhanded shot past Islanders goaltender Parker Orchard to put the Gens up with less than five minutes off the clock.

The lead held until the 14:42 mark of the first when Leevi Kervinen leveled the score at 1-1 with his 14th goal of the season.

In the second period, both sides traded goals once more. Cape Cod took their first lead of the game at the 6:37 mark with his team-leading 17th goal of the season, but Eugene would respond shortly thereafter. Team-leading scorer Jared Coday tied the game at two goals apiece at the 9:28 mark with his 17th goal of the season, a well-placed finish from close range that snuck over the shoulder of Orchard.

Tied after 40 minutes for the second straight day, the Generals were once again stymied in the final period of play. Cape Cod’s Tanner Little regained the Islanders lead with less than three minutes off of the clock, and Nevin Davialut added another just 110 seconds later to provide some insurance.

Despite plenty of time still remaining, Orchard and the Islanders defense held off Eugene's comeback bid to cap a 4-2 defeat for the Gens.

The Generals will aim to finish the NA3HL Showcase on a high note when they wrap up their stay in Minnesota with a Tuesday afternoon matchup against the Willmar WarHawks. The Gens and 'Hawks are scheduled to face off at 12:00pm CST on Rink #8 at the Schwan Super Center with a live broadcast provided by HockeyTV.