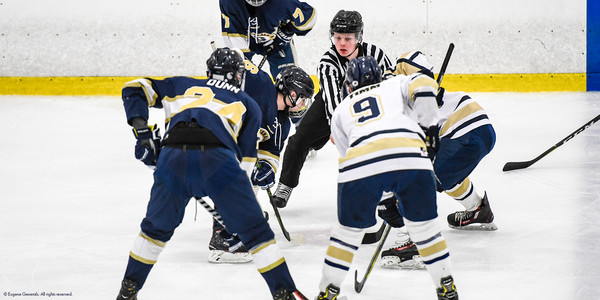 The Eugene Generals (6-11-1-0) opened the North American 3 Hockey League Showcase on a frustrating note Sunday evening, falling to the Wisconsin Whalers (11-12-0-0) by a final score of 6-3.

Playing in the franchise's first-ever NA3HL Showcase, the Generals hit the ice at the Schwan Super Center in Blaine, Minnesota eager to start the stretch of three games in three days on the right note.

Eugene got exactly the start it was looking for when team-leading scorer Jared Coday netted his 16th goal of the season on a well-place wrist shot to put the Generals ahead, 1-0, with just under ten minutes off the clock in the first period.

However, the remainder of the period belonged solely to the Whalers. Wisconsin immediately responded just 14 seconds after Coday's tally to tie the game at 1-1, and again another 15 seconds later to take their first lead of the game, 2-1, in the blink of an eye.

Wisconsin added one more goal at the 16:17 mark of the first period to carry a 3-1 advantage into the first intermission.

The second period was a different story. Only two goals were scored in the game's second twenty minutes, both by Generals.

Generals forward Cody Arbelovsky continued his recent run of excellent form with his 11th goal of the season at the 2:39 mark, a beautiful backhand finish over the shoulder of Whalers goaltender Ryan Hooks to put Eugene back within one.

Just over five minutes later, the score was all knotted up at 3-3. After second-year forward Alex Clark snapped his stick on an awkward play behind the Wisconsin net, he raced to the bench to grab a new stick and promptly scored seconds later, a low one-time shot that snuck under the pad of Hooks to tie the game at three goals apiece.

Tied at 3-3 entering the third period, the Generals couldn't carry the momentum into the game's final twenty minutes.

Wisconsin retook the lead early in the third period and did not look back, scoring three times over a four minute stretch to pull away and ultimately earn a 6-3 victory.

Eugene will look to rebound quickly as they face off against the Cape Cod Islanders at 10:15am CST on Monday morning. A live video broadcast of Monday's game against Cape Cod will be available on HockeyTV.