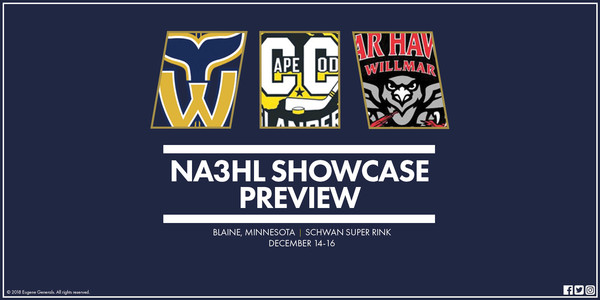 The second showcase trip of the season is (almost) here. The Generals will travel to the Midwest this weekend to face off against a trio of NA3HL opponents at the 2018 North American 3 Hockey League Showcase in Blaine, Minnesota.

This will be the team’s first-ever appearance in the North American 3 Hockey League Showcase. Eugene will face off against the Wisconsin Whalers, Cape Cod Islanders, and Willmar WarHawks.

The Generals head into the trip fresh off of recent a two-game sweep of Seattle where they outscored the Jr. Thunderbirds by a 15-2 margin during the series.

The upcoming trip is the second of three major trips on the schedule for the current season. Back in October, the Generals went winless in three games against three Eastern Hockey League opponents. The Generals are currently slated to return to the East Coast in January to again face competition from the EHL and EHL Premier Division. 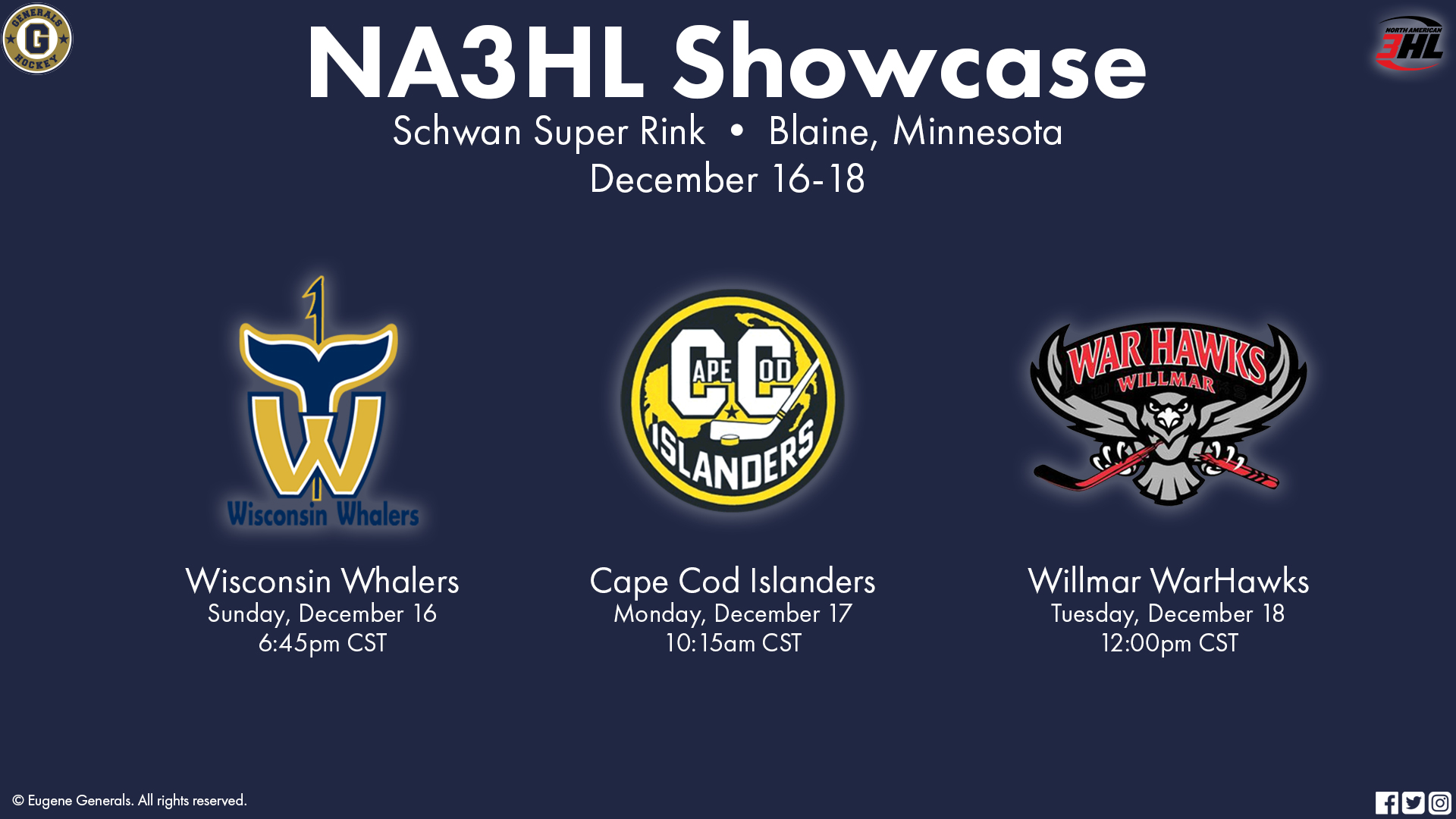 Note(s): The Whalers play out of the Oregon Ice Arena in Oregon, Wisconsin.

Breakdown: Nearing the midway point of the season, the Whalers find themselves in the middle of the pack in the Central Division, caught in a three-horse race for third place with the Peoria Mustangs and the Coulee Region Chill. The Whalers have finished in third place within the Central in each of the previous two seasons, however this season’s addition of the expansion Milwaukee Power, who currently lead the division (22-4-1, 46 points), has made a tough task even tougher for the Whalers. Sam Hanson has been the primary standout on the attack for Wisconsin, and he’s done it in fewer games played (18) than most of his teammates. Hanson currently averages 2.17 points/game (14th in NA3HL), nearly double of the next closest teammate (Anthony Fortin - 1.09). A native of Eau Claire, just three hours up the road from Oregon, Hanson has already spent time at the Tier II level this season having played a game apiece for the Minot Minotauros and the Jamestown Rebels. While Hanson is running away with the team lead in overall points, goals are a separate story. Along with Hanson, four other Whalers have reached double-digits marks in goals scored this season, led by Antony Fortin (14). The third-year Whalers veteran has amassed 36 goals and 51 assists for 87 overall points over his career thus far in Wisconsin.

Breakdown: On the attack, the Islanders are led by Cole Therrien who has played parts of each of the past three seasons with the team (44 career games: 31 goals, 32 assists, 63 points). Along with Therrien, the Islanders are largely led by Levi Kervinen and Mike Goroshko. Kervinen, a native of Finland, is a three-year NA3HL veteran and has tallied 105 overall points in 106 career NA3HL games. The Islanders are currently second in the NA3HL in PIMs (747) trailing only the Milwaukee Power (799). Three Islanders players rank in top 20 in PIMs in the NA3HL: Tanner Little (127, 9th), Matthew Hinckley (104, 14th) and Scotty Hogan (87, 19th). Forward Jimmy Dravage will be facing the Gens for the second time in his career having previously faced off against Eugene as a member of the Richmond Generals during the 2017-18 season, a thrilling 4-3 win for Eugene.

Breakdown: Members of the difficult West Division, arguably the most difficult division in the league, the WarHawks will not have to venture far for the NA3HL Showcase with Blaine being located just two hours east of Willmar. The 2018-19 season has been one of constant change as 45 different players having suited up for the WarHawks at some point throughout this season. Forwards Elijah Slagter and hometown product Jacob May have combined to net 20 of the team’s 48 goals this season. The WarHawks will likely be hungry to light the lamp upon their arrival in Blaine having tallied just one goal in each of the team’s previous three games, albeit against very tough competition (North Iowa - 2, Alexandria - 1). Willmar will hope to be boosted by the recent addition of Cameron Knowlton, a former member of the Wenatchee Wolves, and goaltender Nelson Schiiler who most recently suited up with the Golden Rockets of the KIJHL.

The 2018 NA3HL Showcase will once against be hosted at the Schwan Super Rink in Blaine, Minnesota. The Super Rink is the largest ice arena of its kind in the world, a state-of-the-art facility that features eight sheets of ice (four olympic-sized, four NHL-sized) under one roof. Nearly two million people cycle through the doors of the Schwan Super Rink each year.

Tickets are available in two formats: tournament passes and daily passes. A tournament pass will provide admission for all three days of the NA3HL Showcase while a daily pass will be valid for only one specific day. Prices and options are listed below:

Children 8 and under: FREE

Children 8 and under: FREE

All Generals games at the 2018 NA3HL Showcase will be broadcast live via HockeyTV. A subscription is required to watch any and all content available on HockeyTV. Visit HockeyTV.com to learn more about subscription options.

About The NA3HL Showcase

This season marks the ninth straight year the NA3HL will hold a league-wide Showcase which features some of the best junior talent in the United States.

All NA3HL teams will play three regular-season games at the Showcase, which is annually one of themes well-attended and scouted events of the entire season for the league, attracting college and junior scouts alike. In addition, NAHL Central Scouting will be in full swing for the NA3HL Showcase in Blaine.

For more information on the NA3HL Showcase visit NA3HL.com/showcase.

Currently in its ninth season, the North American 3 Hockey League (NA3HL), one of two USA Hockey-sanctioned Tier III Junior leagues (Eastern Hockey League - EHL), serves as one of the top training grounds in the country by providing the best coaching, exposure and developmental vehicles available for student-athletes in its classification.

The NA3HL began back in the early 1980's as the Junior B level Central States Hockey League (CSHL). In 2007, the CSHL changed from Junior B to Tier III Junior A under the USA Hockey classification system. On November 1, 2010 it was announced that the North American Hockey League (NAHL) would take control of the CSHL. The NAHL-CSHL affiliation allowed for a more structured junior hockey system to provide athletes with more opportunities to advance to college and pro hockey. At the time of the take over the league was renamed to the North American 3 Hockey League (NA3HL).

The primary mission of the NA3HL, which is managed organizationally by the NAHL, is to provide a structured developmental environment for student-athletes whose youth options are limited but are still reaching their potential and have aspirations of playing in the NAHL or United States Hockey League (USHL) and eventually the NCAA or American Collegiate Hockey Association (ACHA).