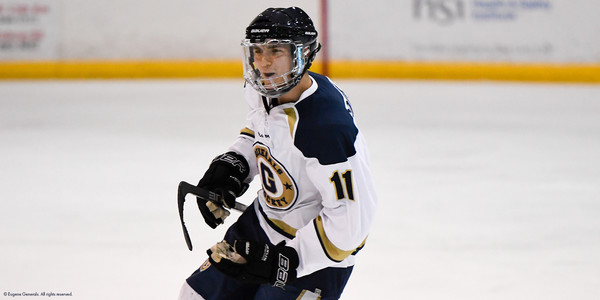 The Eugene Generals (6-10-1) picked up a 9-2 win over the Seattle Jr. Thunderbirds (21-6-0) on Saturday night at The Rink Exchange in Eugene, Oregon to sweep a two-game series between the two teams.

After Eugene netted a 6-0 shutout win the night prior, the two teams took the ice again on Saturday with Eugene aiming to keep their momentum rolling ahead of the upcoming North American 3 Hockey League Showcase in Blaine, Minnesota.

The Generals opened the scoring for the second straight night thanks to Hunter Boivin. The Klamath Falls native slotted home his second goal of the season after a hard shot from the point by Dakota Henn to put Eugene up, 1-0, at the 7:48 mark of the first period.

Seattle's Liam Myers tied the game at one goal apiece at the 11:32 mark of the first period, but Cody Arbelovsky responded less than a minute later with his fifth goal of the series to put the Generals back in front, 2-1, at the 12:15 mark.

Eugene added one more before the break when Nicolas Short scored his first-career goal as a General, a tap-in finish on the back post after Seattle netminder Tyler Roberts made the initial save on a shot from Arbelovsky.

It was more of the same in the second period. Eugene native Broc Friesen made it a 4-1 game at the 9:28 mark, a wrap-around finish that caught Roberts on the wrong post at the wrong time to put Eugene ahead by three. The goal was Friesen's second tally of the series.

Not to be outdone, captain Jackson Baughman added his second goal of the series just minutes later when he fluttered a seeing-eye shot towards the Seattle net and past Roberts to stretch Eugene's lead up to 5-1.

In the third period, Jared Coday became the sixth different goal scorer on the evening for Eugene when he tallied his team-leading 13th goal of the season, a redirection off of a shot form Baughman at the 12:47 mark of the period.

Liam Myers responded at the 7:24 mark with a well-placed wrist shot to score his second goal of the night and simultaneously cut Seattle's deficit back to four, but that would be the last that the Jr. Thunderbirds were heard from on the scoreboard.

Jared Coday proceeded to respond with two more goals - one at the 4:02 mark and another at the 2:04 mark - to stretch Eugene's lead up to six and finish off the first hat trick of his Generals career. Coday's hat trick was the second hatty in as many nights for Eugene after Arbelovsky netted four goals on Friday.

Generals forward Alex Clark added the final goal of the evening with just 76 seconds remaining, a rocket of a wrister that was perfectly placed in the top corner for his tenth goal of the season, and that capped a strong 9-2 win for Eugene in the series finale.

Generals goaltender and Bend, Oregon native Skyler Larsen earned his third win of the season while stopping 38 of 40 shots faced.

Eugene will now head back to practice on Monday morning to prepare for the upcoming NA3HL Showcase in Blaine Minnesota. The Generals are scheduled to face off against the Wisconsin Whalers, Cape Cod Islanders, and Willmar WarHawks.

The Generals return to home ice on January 4-5 for a two-game series against the Portland Jr. Winterhawks. Tickets are available now at EugeneGenerals.com.