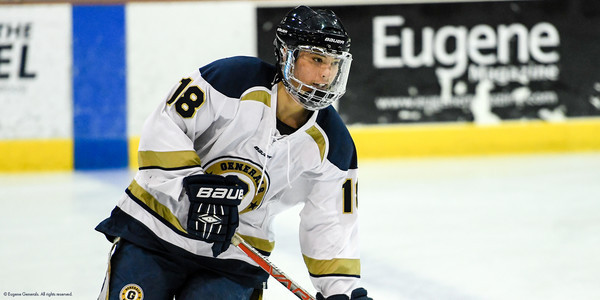 Entering Friday night, it had been over two weeks since the Generals last were in action. Clearly, Eugene was ready to hit the ice, coming away with a 6-0 win in its series opener at The Rink Exchange versus the Seattle Jr. Thunderbirds.

Cody Arbelovsky lead the way for the Gens, scoring four goals for the Generals (5-10-1). Arbelovsky has tallied five goals in the past two games to raise his season total to nine.

Goaltender Carson Roisum continued his strong 2018-19 season, recording the shutout. While Roisum did his job between the pipes, his Generals teammates gave him plenty of cushion to work with on the offensive end.

Eugene’s captain Jackson Baughman broke open the scoring five minutes into the first period, sniping a wrist shot to give the Generals a 1-0 lead.

The Generals didn’t waste any time doubling its lead.

Roughly 15 seconds after Baughman’s goal, Arbelovsky scored his first of the night to give Eugene a 2-0 lead. Defenseman Dakota Henn navigated his way to the net to set up the rebound for Arbelovsky.

Eugene would carry the 2-0 lead into the first intermission, and they came out fast to start the second period. In the opening minute of the period, Arbelovsky - after nearly slipping - took the puck to the top zone and fired a shot through traffic to put the Gens up 3-0.

After killing a 5-on-3 and subsequent 5-on-4 advantage from the Thunderbirds, the Generals put the nail in the coffin when Arbelovsky scored his third of the night to give Eugene a 4-0 lead prior to the halfway point of the second period.

A repair to one of the glass boards resulted in both teams playing the final 24 minutes of the game following the second intermission.

Eugene didn’t let the delay affect them, however, with Broc Friesen and Arbelovsky adding two more goals to give the Generals the 6-0 win.

Once again, it was Henn that set up Arbelovsky for the goal. After stopping a Thunderbirds breakaway attempt, Henn gathered control of the puck and fired a pass across the ice to Arbelovsky, who found the back of the net one last time.

The Generals will look to complete the series sweep on Saturday night at The Rink Exchange. It will be a late start, with the puck dropping at 9:45 pm PST.