Generals, Jr. Thunderbirds To Meet In Final Home Series Of 2018 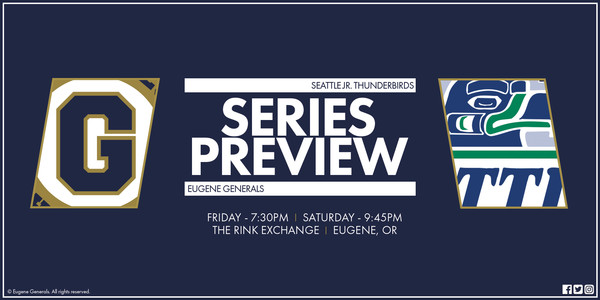 The Eugene Generals (4-10-1) will host the Seattle Jr. Thunderbirds (21-4-0) for a two-game series scheduled for this upcoming Friday and Saturday night at The Rink Exchange in Eugene, Oregon.

This weekend's series will be Eugene's final home games before the team's upcoming winter break. It will also be the first-ever meeting between the two programs and the first of two series currently scheduled between the two teams this season (January 12 & 13 in Eugene - TICKETS).

Eugene will enter the series against Seattle feeling well-rested after enjoying a bye during last weekend. Prior to the bye, the Generals suffered a two-game sweep at the hands of the Wenatchee Wolves in Wenatchee, Washington.

The Gens will start another series with first-year standout Jared Coday continuing to lead the way offensively. Despite having his five-game goal scoring streak snapped in the team's last series against Wenatchee, Coday still leads the team in all major offensive categories including goals (12), assists (9), and points (21).

Right behind him are a trio of veterans with Alex Clark (9G/4A/13PTS), Cody Arbelovsky (5G/6A/11PTS), and Dakota Henn (5G/5/A/10PTS) each having shown glimmers of dominance through the first three months of the season.

The matchup against the visiting Jr. Thunderbirds continues season's slate of games against elite 18U opponents as the 2018-19 season schedule will feature a wide array of Tier III junior, ACHA collegiate, and 18U opponents, a diverse schedule format that can be likened to that of USA Hockey’s National Team Development Program (NTDP). 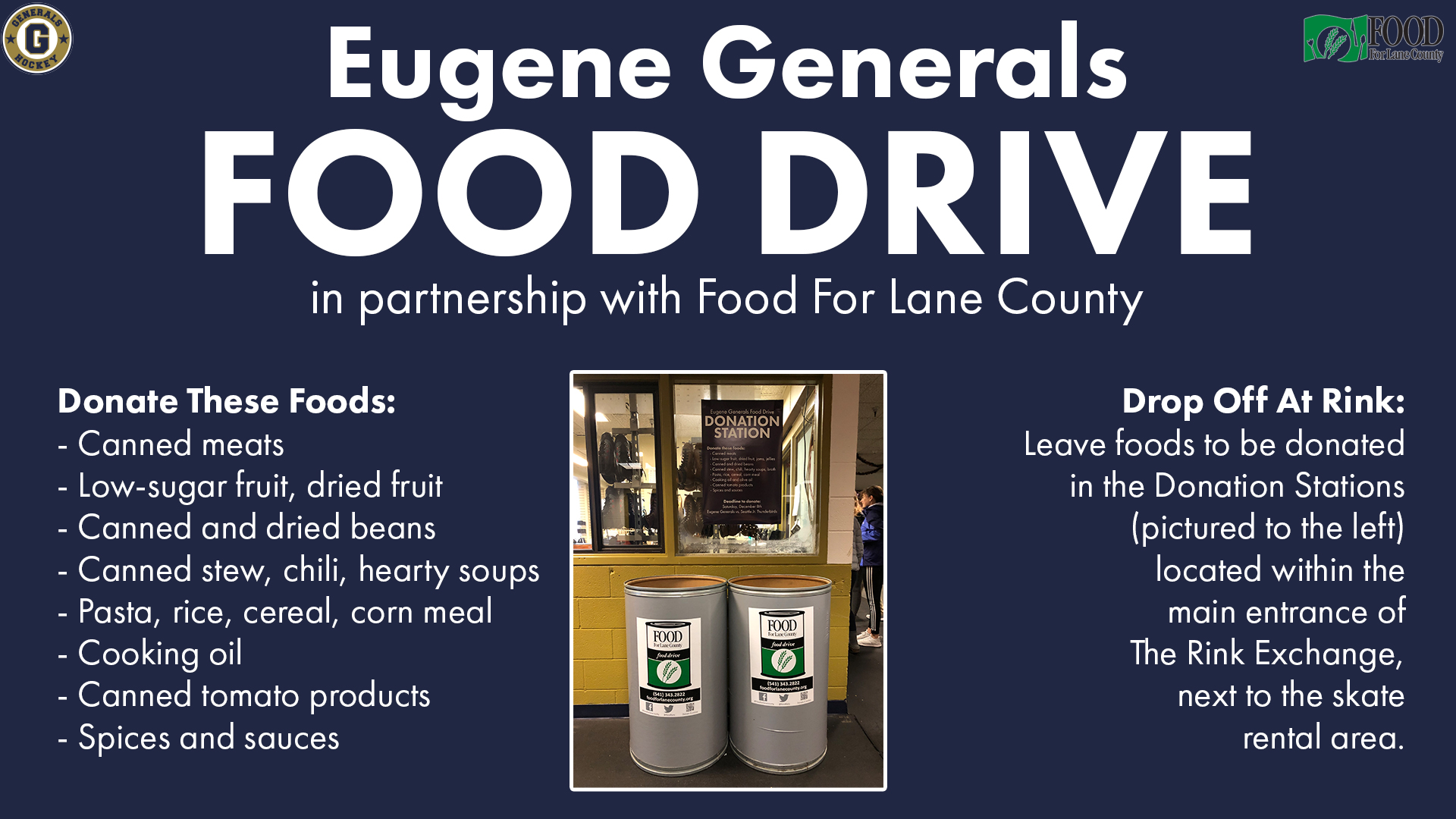 Leading up to this weekend's series against the Jr. Thunderbirds, the Generals are hosting a food drive in partnership with FOOD For Lane County. Fan are encouraged to bring and donate non-perishable food items (listed above) at both Friday and Saturday night's games. Following the conclusion of Saturday's game, the collected food will be delivered to FOOD For Lane County to help those in need throughout our community.

FOOD for Lane County is a private, 501(c)(3) nonprofit food bank dedicated to alleviating hunger by creating access to food. FFLC does this by soliciting, collecting, rescuing, growing, preparing and packaging food for distribution through a network of more than 150 partner agencies and distribution sites; through public awareness, education and community advocacy; and through programs designed to improve the ability of low-income individuals to maintain an adequate supply of wholesome, nutritious food. FFLC serves a diverse population of people living on limited incomes, including children, families, seniors and single adults. FOOD for Lane County is a member of the Oregon Food Bank Statewide Network, partners with United Way of Lane County and is a distribution partner of Feeding America.

Visit www.foodforlanecounty.org to learn more about the services they provide and how you can volunteer or donate.