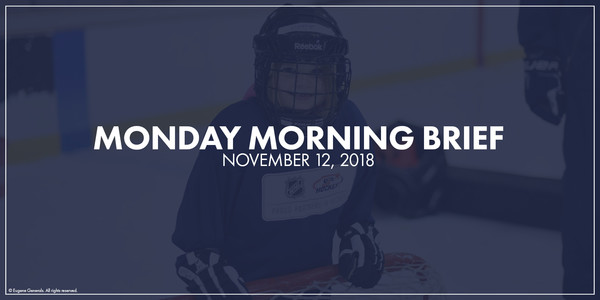 Catch up on a busy weekend of Generals hockey that includes a series sweep, a first-ever hat trick, and an afternoon volunteering to grow the game of hockey.

Eugene swept a two-game series against the Tacoma Rockets on home ice this past weekend, outscoring the Rockets by a 20-3 margin over the two games. The Generals won Friday’s game by a final score of 9-2 and followed that up with an 11-1 win on Saturday.

Jared Coday led all scorers in the series with seven points (4G/3A) and has now scored in five consecutive games. After that impressive performance over the weekend, Coday now leads the team in goals (12), assists (7), and overall points (19). Meanwhile, forward Griffin Minchin tallied the first hat trick of his Generals career to highlight a five-point weekend. His former Jr. Generals teammate Calvin Hennon posted a four-assist night on Saturday, the most by a Generals player in a game this season.

Three Generals players netted their first goals of the season - Devon Dunn, Griffin Minchin, and Calvin Hennon - while goaltender Skyler Larsen earned his first two wins as a General in this past weekend’s games against Tacoma. Dunn’s goal on Friday was his first career goal as a Eugene General.

Forward Nathan Leach also made his long-awaited return to the ice this past weekend to face off against his former team. Leach had previously missed the prior eight games after suffering an upper body injury in a game on September 28 against the University of Oregon.

Generals forward Cody Arbelovsky also made his return to the ice after missing the team's previous game due to a minor upper body injury.

You can watch both of this past weekend's Eugene Generals Hockey Network (EGHN) broadcasts by visiting YouTube.com/EugeneGenerals.

After sweeping the Rockets, the Generals now prepare for the team’s first road series in the Northwest since the opening series of the season as they’ll journey to Central Washington for a two-game series agains the Wenatchee Wolves. The two teams are set to face off on Tuesday, November 20 at 6pm PST and Wednesday, November 21 at 2pm PST. Both games are scheduled to be played at the Town Toyota Center in Wenatchee, Washington.

The Generals will enter the matchup aiming to even the season series between the two teams after Wenatchee previously swept a two-game series against the Generals in Eugene less than two weeks ago.

Prior to Saturday’s game, Generals players volunteered at USA Hockey’s Try Hockey For Free Day at The Rink Exchange.

More than 450 organizations across the country participated in Saturday’s THFF Day event which provides an opportunity for children ages 4-9 to hit the ic and give hockey a try for no cost whatsoever. The event typically occurs 2-3 times per year and is aimed at continuing the growth of hockey across the United States.

The Eugene Generals extend their sincere thanks to the Eugene Jr. Generals, the Lane Amateur Hockey Association, and the many volunteers behind the scenes that together helped make this year’s THFF Day possible.

To learn more about youth hockey and hockey classes in Lane County visit LAHA.org and TheRinkExchange.com.