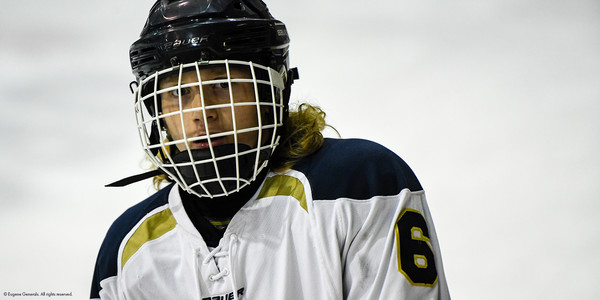 After scoring nine goals on Friday night, the Eugene Generals offense stayed white hot on Saturday, defeating the Tacoma Rockets 11-1 to close out a six-game homestand at The Rink Exchange.

“It was good to see them finally start moving the puck to each other,” head coach Justin Kern said of the series sweep.

Entering the weekend without a goal on the season, Griffin Minchin had his coming out party for the 2018-19 season in the weekend series versus Tacoma. After scoring his first goal of the season on Friday, the Generals forward recorded a hat trick on Saturday night to lead the Gens offensive charge.

Just 20 seconds into the game, a loose puck in front of the Generals net found the stick of Kaiwo Kawai, who scored for the second straight game to give the Rockets an early 1-0 lead.

Tacoma came out hot to begin the game, but Eugene closed the first period on their terms. With just over a minute remaining in the period, Broc Friesen found the back of the net to even up the score at one prior to the end of the period.

After an even first period, the Generals (4-8-1) didn’t mess around coming out of the first intermission.

Eugene didn’t squander a power play to begin the second period, with Alex Clark firing a wrist shot to the back of the net to give the Gens a 2-1 lead. Eugene followed up the power play goal with a shorthanded goal, when Minchin scored his first goal of the night to put the Generals up 3-1.

With Eugene starting to separate on the scoreboard, the Rockets had a golden opportunity to get right back in the contest when they went on a 5-on-3 power play with just over 13 minutes remaining in the second.

However, the Generals were able to stifle the two-man advantage. Following the penalty kill, Jared Coday – who had just come out of the penalty box alongside Cody Arbelovsky – scored his team-leading eleventh goal of the season to give the Generals a 4-1 lead.

“Anytime you can kill a 5-on-3, it sets the tone for the rest of the game,” said Kern. “If you can shut them down on that, it’s usually pretty demoralizing.”

The Gens carried the momentum from the penalty kill and subsequent goal to apply the beatdown on Tacoma. Goals from Baughman, Hennon, Minchin and Bayliffe gave Eugene an 8-1 lead heading into the final period.

Baughman’s goal was his second of the weekend to double his season total to four. Hennon’s goal, meanwhile, was his first of the season.

With 16:40 remaining in the third period, Minchin directed a pass in front of the net past the Rockets goaltender to give the Gens a 9-1 lead. The goal was Minchin’s third of the night to finish off the hat trick.

“He’s one of those kids who is a really skilled player and busting his butt in practice who somehow hadn’t gotten the reward in games,” said Kern. “It was good to see him get up on the scoresheet and I just want to see him carry that momentum moving forward.”

Coday and Bayliffe each tacked on their second goal of the night to close out the scoring for Eugene.

Goaltender Skyler Larsen got the start in net again following his first win of the season on Friday. Following the quick goal by Tacoma, Larsen was brilliant, holding the Rockets scoreless the rest of the way.

The Generals will look to avenge its two losses versus the Wenatchee Wolves when they travel to the Town Toyota Center on November 20 for a two-game series.