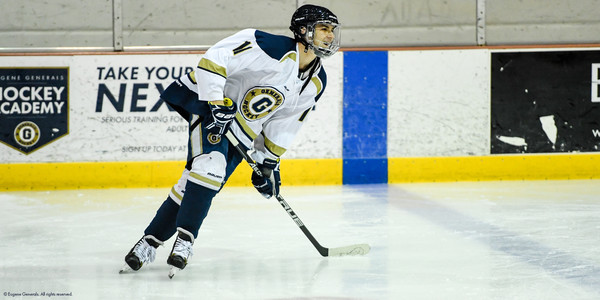 Eugene is back in the win column. In a big way. After being edged out in a series of hard-fought games, the Generals offense went nuclear on Friday night, defeating the Tacoma Rockets, 9-2, to snap a six-game losing streak.

“It’s good to get a win finally and get some confidence rolling,” said head coach Justin Kern following the game. “Hopefully it’s something we can build off going into tomorrow.”

Just over a minute into the contest, a penalty called on Tacoma put the Generals in position to go on the power play. During the delayed penalty, though, Jared Coday scored an unassisted goal on a wraparound to give Eugene an early 1-0 advantage.

With the goal, Coday continued his hot streak, scoring in his fourth straight game.

On Friday, it didn’t take long for Coday’s teammates to follow his lead. Eugene found the back of the net three more times in the opening period to build a 4-0 lead for a Generals team that has spent most of its homestand fighting from behind.

With just under 12 minutes remaining in the first, the Generals turned a Rockets power play on its head. Eugene defenseman Dakota Henn found the five-hole of Rockets’ goaltender Wesley Froehle for a shorthanded goal to give Eugene a 2-0 lead.

Eugene kept their foot on the gas. With 10:12 remaining in the opening period, Jackson Baughman set up a one-timer for Cody Arbelovsky, who punched it in to bump the Generals lead to 3-0.

It was a group effort by Generals at The Rink Exchange, highlighted by Devon Dunn scoring his first goal as a General with 7:50 remaining to give Eugene a 4-0 lead, which would end up being 4-1 going into the intermission.

If the opening 20 minutes was a series of body blows, then the Generals surely delivered the knockout in the second period.

With under nine minutes remaining in the second, Alex Clark and Griffin Minchin scored 34 seconds apart to bump the Generals lead to 6-1. Minchin’s goal – a one-timer set up by Coday – was his first goal of the 2018-19 season.

Coday and Arbelovsky weren’t done scoring, either. Each scored their second goal of the night to bump the Generals goal total to eight, as Eugene took an 8-2 lead heading into the final period.

Baughman tacked on a goal in the third to wrap a convincing win that saw seven different goal scorers for the Generals.

“It’s really good to have contributions from lots of different guys and to get confidence for guys that have been working real hard but have not been rewarded,” said Kern.

In his third start of season, goaltender Skyler Larsen got the job done and recorded his first junior win.

Friday night treated Nathan Leach well. The Generals forward returned from an upper-body injury suffered on September 28 versus the University of Oregon. It came just in time for Leach, who returned for the win against the Rockets, his former team.

Eugene will aim to end their six-game homestand on a high and sweep Tacoma. The Generals and Rockets will be right back at it in the series finale on Saturday, November 10th at 7:30 pm PST at The Rink Exchange in Eugene, Oregon. Tickets are available online at EugeneGenerals.com.