Generals And Rockets Ready For Liftoff In Eugene 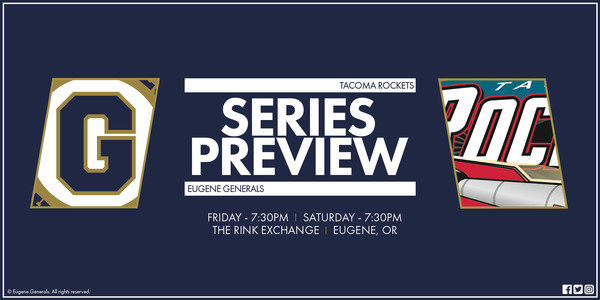 The Eugene Generals will host the Tacoma Rockets in a two-game series to be played this upcoming Friday and Saturday night at The Rink Exchange In Eugene, Oregon.

This weekend's matchup marks the tail end of the current homestand for the Generals, a six-game run on home ice that has so far seen the Gens drop a number of close, hard-fought games against Northwest opponents. Despite the recent run of frustrating results, the Gens will be aiming to finish the homestand on a high note as they welcome the Tacoma Rockets to Eugene for the first-ever matchup between the two teams.

Generals forward Jared Coday enters the weekend as perhaps the hottest player on the team having scored in each of the team's past three games. The first-year forward has had little trouble adjusting to juniors as he currently leads the team in both goals scored (8) and overall points (12).

Between the pipes, Head Coach Justin Kern will likely look to Bend, Oregon native Skyler Larsen for a bulk of the playing time this weekend. Larsen will be eager to return to the ice after being forced to leave mid-game during his previous appearance (10/20/18 vs. Portland) due to injury.

Generals forward Nathan Leach, a former member of the Tacoma Rockets, will be aiming to return to the lineup for the first time since late September after suffering an upper body injury in a game against the University of Oregon. The Generals will also hope to have veteran forward Cody Arbelovsky rejoin the active roster after he previously missed last Sunday's game against the Wenatchee Wolves with an upper body injury. Arbelovksy enters the weekend fourth on the team in points (1G/5A/6PTS).

Saturday is Try Hockey For Free Day at The Rink Exchange, the home venue for the Eugene Generals. The event is scheduled to take place from 3:00pm to 4:30pm and is open to kids ages 4-9.

Registration is 100% free and you can sign up at TryHockeyForFree.com. However, spots are limited, so be sure to register your child as soon as possible.

Generals players will be on hand at this year's Try Hockey For Free event to help coach and participate in introducing kids to the game of hockey.