Wenatchee Holds On For Win In Series Opener 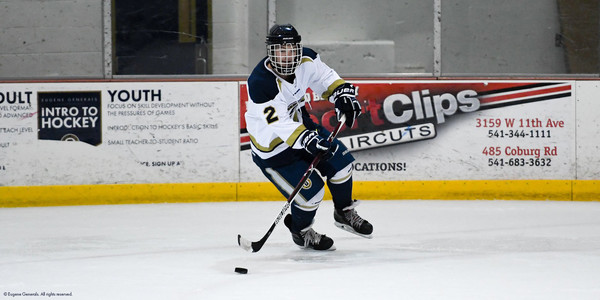 Facing off for the first time this season, the two former NPHL franchises hit the ice at The Rink Exchange after each enjoying a bye the weekend prior.

Saturday's series opener started with an even first five minutes of play, however Wenatchee capitalized on the first power play of the game to take an early 1-0 lead. With Generals defenseman Devon Dunn serving a two-minute minor hooking penalty, Wolves defenseman Bryce Fetzer rifled home a hard wrist shot on a two-on-one opportunity to put the visiting Wolves ahead early.

The Wolves would be heard from again before the break. Wolves forward Tae Jean Evans was credited with Wenatchee's second goal of the game at the 17:14 mark when a wrist shot from the top of the faceoff circle took an unfortunate deflection off Generals defenseman Jackson Baughman and snuck past a sliding Carson Roisum in net.

However, the Generals answered back in the second period. Still trailing, 2-0, after reaching the midway point of the period, Jared Coday, who entered the night as the team's top point-getter, scored on a perfectly placed finish over the far shoulder of Wolves goaltender L.J. Newell to cut Eugene's deficit back to one. The goal was Coday's seventh of the season tying him with Alex Clark for the top spot on the team.

The 2-1 score would hold through the second intermission and deep into the third period as the Generals pressed for an equalizer, but Coday's tally was the only goal that Eugene could muster on the evening. Wolves forward Grady Hartmeier scored an empty net goal with just 11 seconds remaining in regulation to seal a 3-1 win for Wenatchee.

Generals goaltender Carson Roisum was superb in net once more despite taking the loss. The Wisconsin native stopped 42 of 44 shots faced on the evening.

Eugene will now aim for a split of the two-game series. The Generals and Wolves wrap up this weekend's matchup on Sunday afternoon at 12:15pm PST at The Rink Exchange in Eugene, Oregon. Tickets are available online at EugeneGenerals.com.