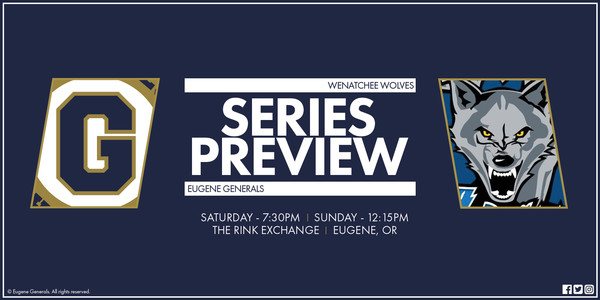 The Eugene Generals (2-6-1) will host the Wenatchee Wolves (9-6-0) for a two-game series to be played Saturday and Sunday at The Rink Exchange in Eugene, Oregon.

Saturday's game is scheduled to start at 7:30pm PST while Sunday's game will be an afternoon affair with an expected puck drop of 12:15pm PST.

It will be this season's first meeting between the two former NPHL programs as the Generals aim to find the win column after dropping a pair of close games to the Portland Jr. Winterhawks two weeks prior.

Having enjoyed a bye week following the two-game series against Portland, the Generals enter this weekend's matchup feeling rejuvenated and eager to end a run of tough losses that has plagued the team in the early portion of the season. Five of Eugene's seven losses this season have come by two goals or less, and three of those games have been decided by just one goal.

Eugene will likely look to top netminder Carson Roisum for a strong performance against the high-powered Wolves this weekend, and the young Wisconsin native has shown he's certainly capable of delivering big saves in big moments for the Generals.

On the attack, first-year forward Jared Coday (6G/4A/10PTS) moved into the top spot on the team in points after scoring twice and adding an assist in the team's previous two-game series against Portland. Veterans Dakota Henn (4G/4A/8PTS), Alex Clark (7G/1A/8PTS), and Cody Arbelovsky (1G/5A/6PTS) have also been consistently at or near the top of the Generals stat sheet, and strong performances will be expected from them this weekend.

Despite going winless in the team's first six games of the season, the Wolves have not lost since. Wenatchee enters this weekend's series as winners of nine consecutive games while also sitting atop the NAPHL's Elite Division with a 7-1-0 record.

The team also serves as a developmental squad for the BCHL's Wenatchee Wild, one of the nation's most well-respected junior hockey organizations led by the United States' all-time winningest junior hockey coach, Bliss Littler.

The matchup against the visiting Wolves continues season's slate of games against elite 18U opponents as the 2018-19 season schedule will feature a wide array of Tier III junior, ACHA collegiate, and 18U opponents, a diverse schedule format that can be likened to that of USA Hockey’s National Team Development Program (NTDP).