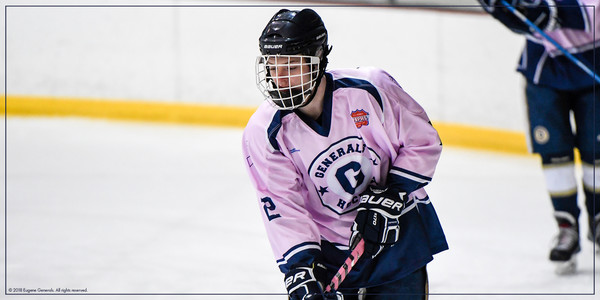 The Eugene Generals were defeated by the University of Oregon Ducks by a final score of 5-3 on Friday night at The Rink Exchange in Eugene, Oregon.

Those game-worn Hockey Fights Cancer jerseys are now available for purchase via online auction at EugeneGenerals.com/auction.

The two teams were facing off for the third time this season after having already split a two-game series back in September with each team claiming a 5-4 victory in the previous series.

The new-look Ducks started strong and quickly jumped out to a 2-0 lead thanks to a pair of first period goals by midseason addition Connor Rendell, the first coming during four-on-four play and the second coming while the Ducks were shorthanded thanks to a nifty set up by Trevor Shott on a two-on-one opportunity.

Trailing, 2-0, in the second period, the Generals got on the board thanks to defenseman Dakota Henn who buried a hard shot from the slot after receiving a nice feed from assistant captain Kenneth Griffin to cut Eugene’s deficit back to just one.

Henn was heard from again just under four minutes later when he rang a hard shot off the corner of the crossbar and into the Oregon net to tie the score at 2-2.

Oregon responded 98 seconds before the intermission when Kiernan Gillooley converted an open opportunity in the slot give the Ducks a 3-2 lead with twenty minutes remaining in regulation.

Still trailing with under thirteen minutes left in regulation, the Generals tied the score for the second time in the game thanks to a spectacular coast-to-coast solo effort by defenseman Garrett Foster that resulted in a shot that beat Oregon netminder Ben Green to tie the game at 3-3.

However, before the celebration had even finished the Oregon Ducks had regained their lead as it took only 13 seconds for the Ducks to respond thanks to Adam Susman who buried a feed from Shott put the Ducks back in front.

The Ducks added one more goal later in the third period when Andrew Lee netted Oregon’s second four-on-four goal of the game with 4:53 remaining to seal a 5-3 win.

The Generals and Ducks will now wrap up their respective seasons with one final matchup on Saturday, February 17th at The Rink Exchange in Eugene, Oregon.The puck is scheduled to drop at 7:30pm PST on Saturday night.

Tickets to Generals home games are available for purchase at EugeneGenerals.com or in-person starting thirty minutes prior to puck drop at the Eugene Generals Box Office, located inside The Rink Exchange.

A live, free and HD video broadcast of Saturday's game against the Ducks will be available via Facebook Live with coverage starting approximately 15 minutes prior to puck drop.