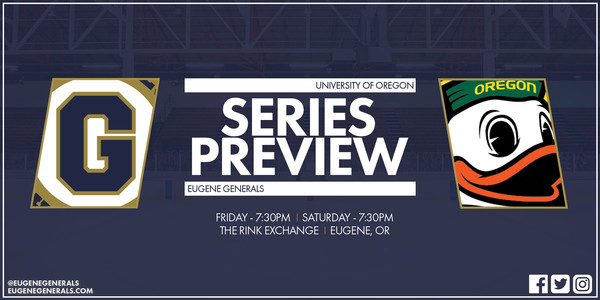 The Eugene Generals will wrap up the 2017-18 season this weekend against the Oregon Ducks in a two-game series scheduled for Friday and Saturday night at The Rink Exchange in Eugene, Oregon.

This weekend's matchup will serve as the third and fourth times that the two teams will have faced off this season. The Ducks and Generals previously split a thrilling two-game series back in September with each team winning by a 5-4 margin.

The Ducks enter the weekend as a much different team than the one that the Generals faced nearly five months ago, and that's largely due to the efforts of Oregon Head Coach Rylee Orr and Assistant Coach Cooper Limb, both whom are in their first seasons on the Oregon bench. After starting ACHA play with ten consecutive losses, the pair helped navigate a major turnaround that saw the Ducks reel off eight straight wins, thanks in large part to a pair of high-flying midseason additions in Connor Rendell and Andrew Lee.

Meanwhile, the Generals head into the season's final weekend nursing a number of injuries throughout the roster. Forwards Nathan Leach and Bradley Maddox and defenseman Jackson Baughman have already suffered season-ending injuries, and key contributors like captain Jack Thornton and leading-scorer Alex Clark will likely be less than 100% when they hit the ice this weekend.

Nevertheless, the Generals will enter the weekend eager to end the season on a high note after playing what has been pay-to-play junior hockey's most diverse and unique schedule during the 2017-18 season. Alden Dupras, a member of the Eugene Jr. Generals 18U team, is slated to make his junior hockey debut this weekend with the Generals.

Friday night's game will be Hockey Fights Cancer Night, presented by the Health & Safety Institute (HSI). The Generals will be sporting purple uniforms designed to pay tribute towards those that have fought and continue to fight cancer.

Saturday night's game will be Host Family Appreciation Night as the Generals honor all of the families that have so graciously opened up their homes to Generals players this season. All host families in attendance will be honored in a ceremony scheduled to be held during the first period of Saturday's game.

The puck is scheduled to drop at 7:30pm PST on both Friday and Saturday night. Tickets to Generals home games are available for purchase at EugeneGenerals.com or in-person starting thirty minutes prior to puck drop at the Eugene Generals Box Office, located inside The Rink Exchange.

A live, free and HD video broadcast of both games vs. the Ducks will be available via Facebook Live with coverage starting approximately 15 minutes prior to puck drop.