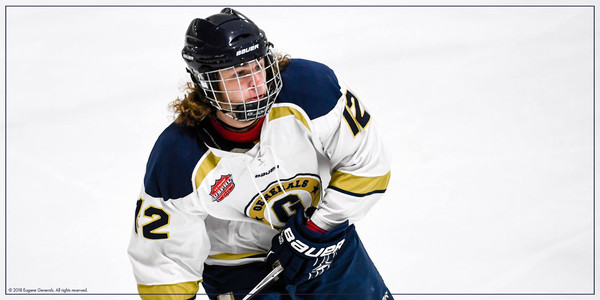 The Eugene Generals dropped Saturday night’s series finale against the Wenatchee Wolves by a final score of 5-2.

Wrapping up a two-game series at The Rink Exchange in Eugene, Oregon, the Generals and Wolves hit the ice on Saturday in what was the final meeting between the two teams scheduled for the 2017-18 season.

Wenatchee started the scoring at the 14:39 mark when forward Josiah Crombie redirected a Jake Burke shot from the high slot past Generals goaltender Christopher Alexakis to put the Wolves ahead, 1-0.

The Wolves made it 2-0 four minutes later when JayVon Fogelgren snuck a shot just past the outstretched pad of a sliding Christopher Alexakis and inside the far post.

In the second period, Wenatchee turned the 2-0 advantage into 4-0 in the span of just 15 seconds as Tanner Dey and Josiah Crombie each scored in quick succession to turn a slim margin into a comfortable lead in the blink of an eye.

That lead was cut back to three at the 4:15 mark when Generals leading-scorer Alex Clark buried a one-timer in the low slot off an excellent no-look feed from Frazier “Butch” Mohler.

Wenatchee’s four-goal lead was restored by just the slimmest of margins when Wolves forward Jake Landers converted a breakaway opportunity with just one second remaining in the period, giving the Wolves a 5-1 lead after forty minutes.

Eugene was heard from again at the 10:37 mark of the third when defenseman Garret Foster engineered a spectacular solo effort that saw him force a turnover on the Eugene blue line, beat a Wenatchee player into the attacking zone, circle back, beat two Wenatchee players off of the wall, then sneak through another two Wenatchee players before burying a well-placed backhanded shot from the low slot over Greenlee's shoulder.

Foster's tally was the last goal for either side, though, as Wenatchee would close out the game's final ten minutes and earn a 5-2 victory.

The Wenatchee Wolves, led by captain Zach Ross, will now conclude their season with a matchup against the Everett Jr. Silvertips as well as the looming NAPHL Playoffs and the PNAHA Tournament. The Generals organization wishes the Wolves well throughout the remainder of the 2017-18 season, and beyond.

The Generals will now enjoy a bye week before wrapping up the 2017-18 season with a two-game home series against the University of Oregon Ducks. The Generals and Ducks will meet Friday, February 16th and Saturday, February 17th. Both games are scheduled to begin at 7:30pm PST at The Rink Exchange in Eugene, Oregon.

Saturday will be celebrated as Fan and Host Family Appreciation Night as the Generals honor the most important part of its #GensFam.

A live, free and HD video broadcast of both games against the Ducks will be available via Facebook Live with coverage starting approximately 15 minutes prior to puck drop.