Wolves Win Round One In Eugene 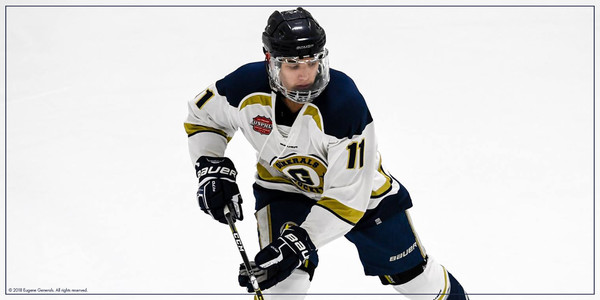 The Eugene Generals dropped Friday night’s game against the Wenatchee Wolves by a score of 13-3 in what was the first of a two-game series between the two teams.

However, the lack of depth didn’t stop the Generals from playing an impressive first twenty minutes against the Wolves. After Wenatchee’s Sydney Lee scored the game’s opening goal with just 3:38 off the clock in the first period, Generals forward Frazier “Butch” Mohler tied the score at the 10:30 mark after forcing a turnover deep in the Wenatchee zone and jamming the equalizer past Wolves netminder Ben Greenlee from point-blank range.

Eugene then took the lead at the 6:04 mark when Generals forward Blaine Krona converted a three-on-one opportunity when his attempted pass-off-pad trickled past Greenlee and into the Wenatchee net.

The Eugene lead lasted until the 2:00 mark of the period when Wolves forward Cameron Knowlton tied the game at 2-2, a score that would carry into the first intermission.

Wenatchee never looked back as the Wolves netted six more goals in the second period and another five goals in the third period to win by a comfortable 13-3 margin.

Mohler netted the Generals’ third and final goal at the 15:00 mark of the third period, his second unassisted goal of the game.

The two teams conclude the series on Saturday, February 3rd at 7:30pm PST at The Rink Exchange, located at the Lane Events Center.

A live, free and HD video broadcast of Saturday's game againt the Wolves will be available via Facebook Live with coverage starting approximately 15 minutes prior to puck drop.