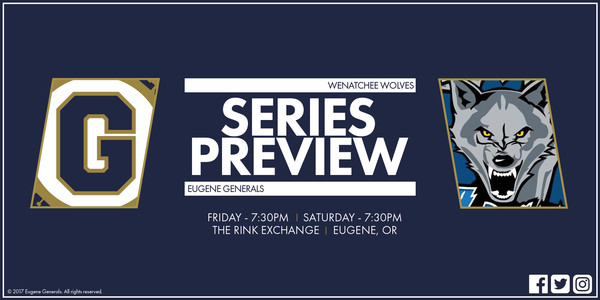 The Eugene Generals and the Wenatchee Wolves will face off in a two-game series scheduled for this upcoming Friday and Saturday night at The Rink Exchange in Eugene, Oregon.

This weekend’s matchup will be the Wolves’ first and only visit to Eugene this season, and it will be the final series between the two teams scheduled during 2017-18.

The Wolves are one of two 18U AAA programs (Everett Jr. Silvertips) that the Generals have faced off against in a season that has featured pay-to-play junior hockey’s most diverse schedule format.

Wenatchee will travel to Eugene boasting a 20-18-1 record across all competitions. Similarly to Eugene, the Wolves play a unique schedule that includes NAPHL 18U, Tier III junior, and Canadian opponents.

The history between the Generals and Wolves programs reaches beyond just this current season as the two first played one another as members of the Northern Pacific Hockey League (NPHL) during 2014-15.

The puck is scheduled to drop at 7:30pm PST on both Friday and Saturday night. Tickets to all remaining Generals home games are available for purchase at EugeneGenerals.com or in-person starting thirty minutes prior to puck drop at the Eugene Generals Box Office, located inside The Rink Exchange.

A live, free and HD video broadcast of both games vs. the Wolves will be available via Facebook Live with coverage starting approximately 15 minutes prior to puck drop.