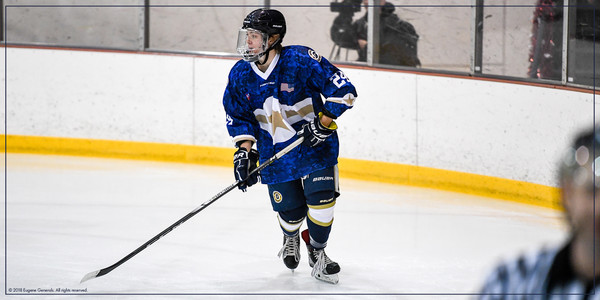 The Eugene Generals suffered a 2-1 defeat at the hands of the Western Washington University Vikings on Saturday night at The Rink Exchange in Eugene, Oregon.

Celebrating Military Appreciation Night, the Generals and Vikings faced off for the fourth and final time this season with WWU having won each of the previous three matchups by a two-goal margin.

Saturday night’s game started almost identically to Friday’s as the Generals controlled play through the majority of the opening period, but a late-period penalty taken by the Generals forward Blaine Krona quickly paid dividends for WWU as Vikings forward Iver Jackson netted a nifty backhand goal from the slot to put WWU ahead, 1-0.

In the second period, a boarding penalty taken by Generals captain Jack Thornton led to another WWU power play goal when Vikings forward Dawson Roberts buried a wrist shot past Generals goaltender Christopher Alexakis at the 6:43 mark to double the WWU lead.

Still trailing by two later in the third period, Eugene was given a gift in the form of a five-minute power play when Vikings defenseman Mark MacDonald drew his fifth penalty of the game, a spearing penalty that resulted in the former NPHL product being shown the exit.

Blaine Krona capitalized on the extended power play and put the Generals on the scoreboard when he punched home a loose puck off a rebound from Vikings goaltender Robert MacDonald, giving Eugene a glimmer of hope with exactly 100 seconds remaining in regulation.

However, Eugene couldn’t find the game-tying goal in the waning seconds as the Vikings shut the door to seal the win and the sweep in Eugene.

Eugene goaltender Christopher Alexakis stopped 31 of 33 shots in the loss. The Generals outshot the Vikings, 44-33, on Saturday night.

The Generals now head back to work with a big series against the Wenatchee Wolves looming next weekend. The Gens and Wolves face off Friday and Saturday night at The Rink Exchange in Eugene, Oregon. The puck is scheduled to drop at 7:30pm PST for both games against the Wolves.

Tickets to every Generals home game can be purchased in advance via EugeneGenerals.com or in-person at the Eugene Generals Box Office, located at The Rink Exchange, starting approximately thirty minutes prior to puck drop. Admission is $10 for adults, $6 for students/seniors (must present valid I.D.) and children under the age of five are free of charge.

The military-inspired jerseys worn by the Generals during Saturday's game are now available for purchase via online auction at EugeneGenerals.com/auction. The auction is scheduled to end on Saturday, February 3rd at 7:30pm PST.