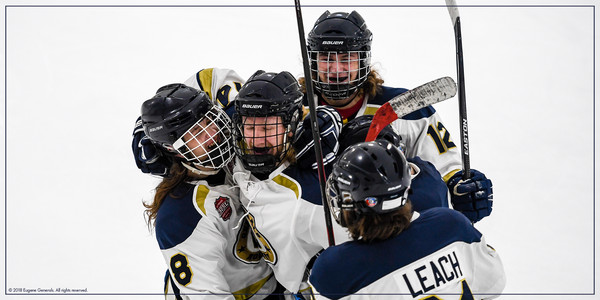 Eugene's final USPHL Showcase Series event of the season is officially in the rear-view mirror as this past Monday saw the Gens wrap up a wild weekend of hockey (and weather) in Marlborough, Massachusetts.

Last weekend's Winter Showcase will certainly be one to remember as the Generals combatted travel difficulties and a demanding slate of games with poise and professionalism. While there were plenty of great storylines from this past weekend of hockey, a handful stood out above the rest. Here's the top five moments of the 2018 USPHL Winter Showcase, from the Eugene Generals perspective:

The much-publicized “bomb cyclone” that swept through the East coast - particularly the Northeast - last weekend caused chaos before the Winter Showcase could even begin. Eugene was one of the teams that ran into problems before they could even leave home as the team's original plan to arrive in Boston on Thursday evening was scrapped after an early morning flight cancellation.

Fast-forward 24 hours and the Generals somehow, someway found their way to Massachusetts, thanks in part to the coordination of Generals GM Flint Doungchak and the tireless work done by John Pellerin, the USPHL's Head of Hockey Operations.

Many teams were not nearly as lucky, though, as nearly a dozen Elite League teams were forced to scrap their weekend plans entirely and remain home as a safety precaution. 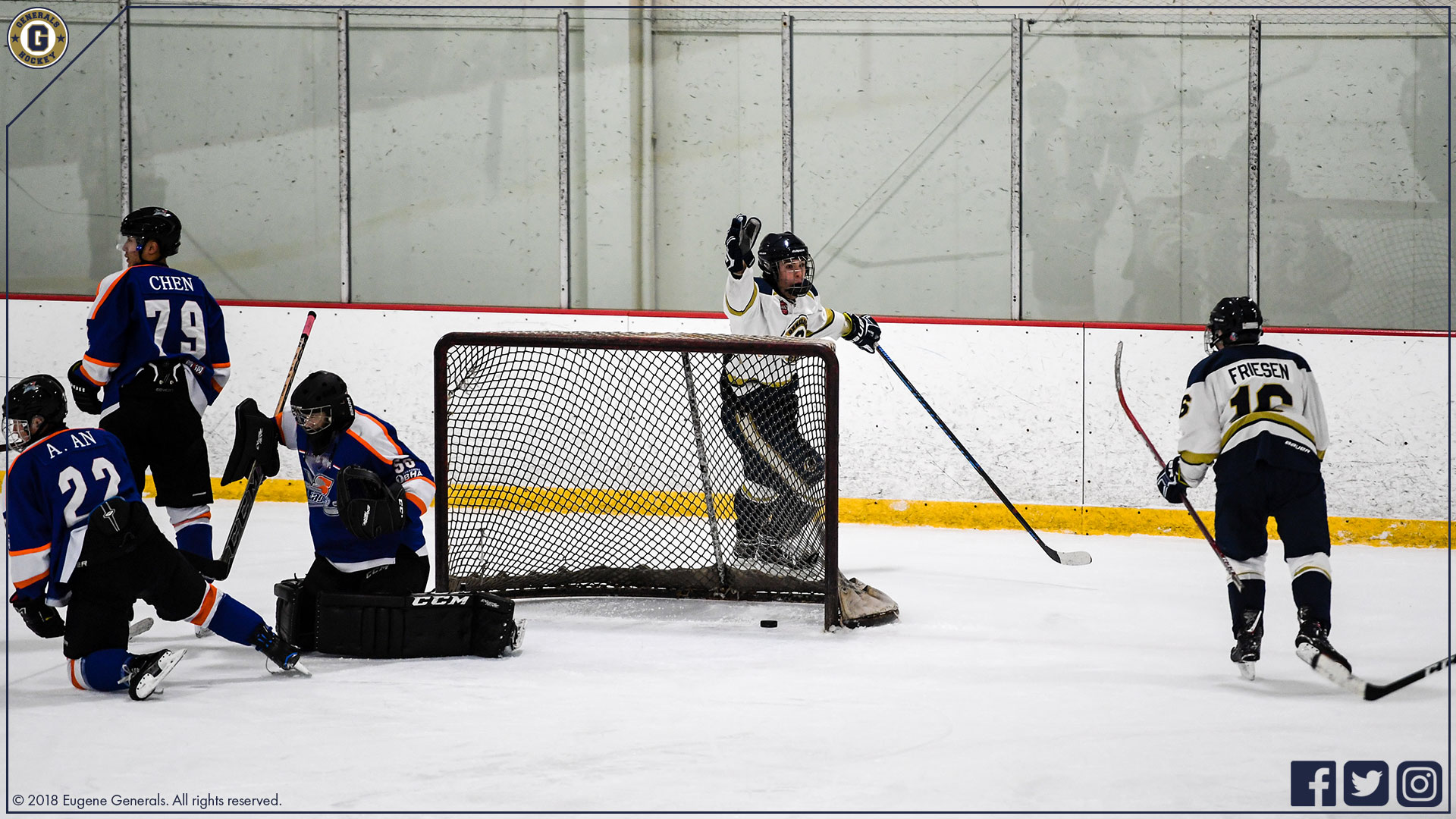 Generals forward Nathan Leach celebrates after scoring what would be the game-winning goal in Eugene's 5-3 win over the Beijing Shougang Eagles at the 2018 USPHL Winter Showcase.

Just six hours removed from suffering their first loss of the weekend, a 2-0 defeat to the Springfield Pics, Eugene bounced back in impressive fashion to net its third win over a 36-hour span, but it wasn't easy.

Beijing needed only 18 seconds of play to take a 1-0 lead, sparking a dramatic, seesaw game that would see the two teams tied on the scoreboard on three separate occasions.

Trailing, 2-1, at the intermission, Eugene roared back with four goals in the final 25-minute period to net a 5-3 win over Beijing with goals from Alex Clark, Dakota Henn, Jack Thornton (2), and Nathan Leach. The game-winning goal came off the stick of first-year forward and Tacoma, Washington native Nathan Leach who buried a bar-down shot from point-blank range to net Eugene's third win in four games.

Note: the Beijing Shougang Eagles are in their second year of play as part of a development project led by the Beijing Hockey Association, in partnership with the New York Islanders, with the long-term goal of helping China field an ice hockey team for the 2022 Winter Olympics in Beijing-Zhangjiakou. 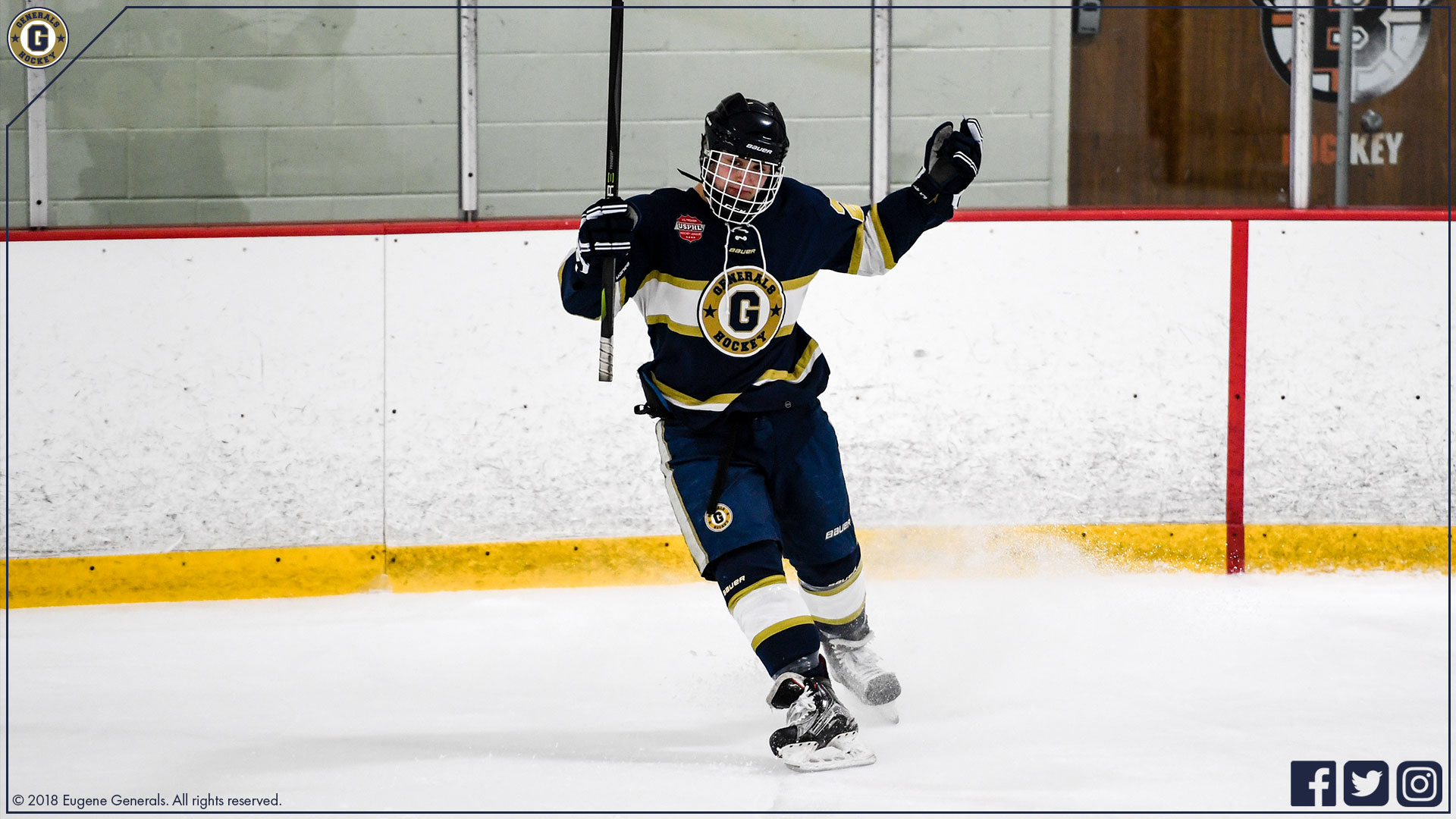 Generals forward Alex Clark celebrates one of his five goals at this past weekend's USPHL Winter Showcase.

Game-by-game, shift-by-shift, first-year forward Alex Clark has continued to display strong and steady progress throughout the 2017-18 season. This past weekend, Clark showed signs of turning a corner and transitioning from consistent contributor to a potential game changer and a force to be reckoned with throughout the USPHL.

The Wasilla, Alaska native scored a team-high 5 goals at the USPHL Showcase, increasing his team-leading total to 16 goals this season. He finished tied for the showcase lead in goals scored while also being the only Elite League player to score in four separate games. In each of the team’s five games in Massachusetts, Clark showcased his unique skillset that blends elements of power and skill with an added dose of deceptiveness.

Check below to see Eugene's top scorers from the Winter Showcase: 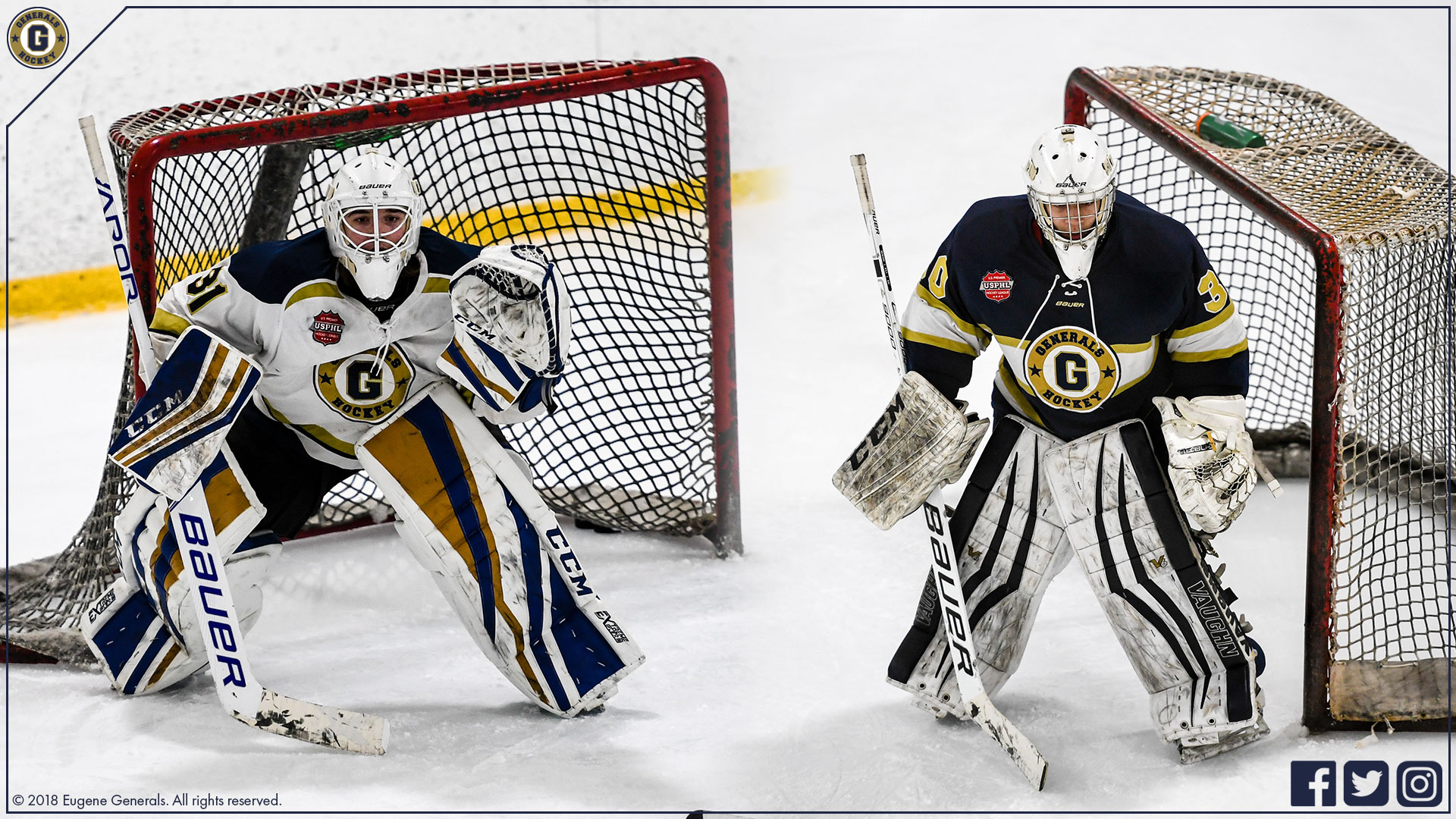 Any doubt that Eugene boasts the Elite League’s best goaltending tandem was put to rest in Massachusetts this past weekend. Christopher Alexakis and Jamie Frantz combined to stop 150 of 160 shots faced at the showcase, including a pair of shutouts. The Generals finished the showcase as one of only three teams to post multiple shutouts (Boston Jr. Bruins, Springfield Pics) and one of only two teams (Boston Jr. Bruins) to have two different goaltenders each post a shutout. 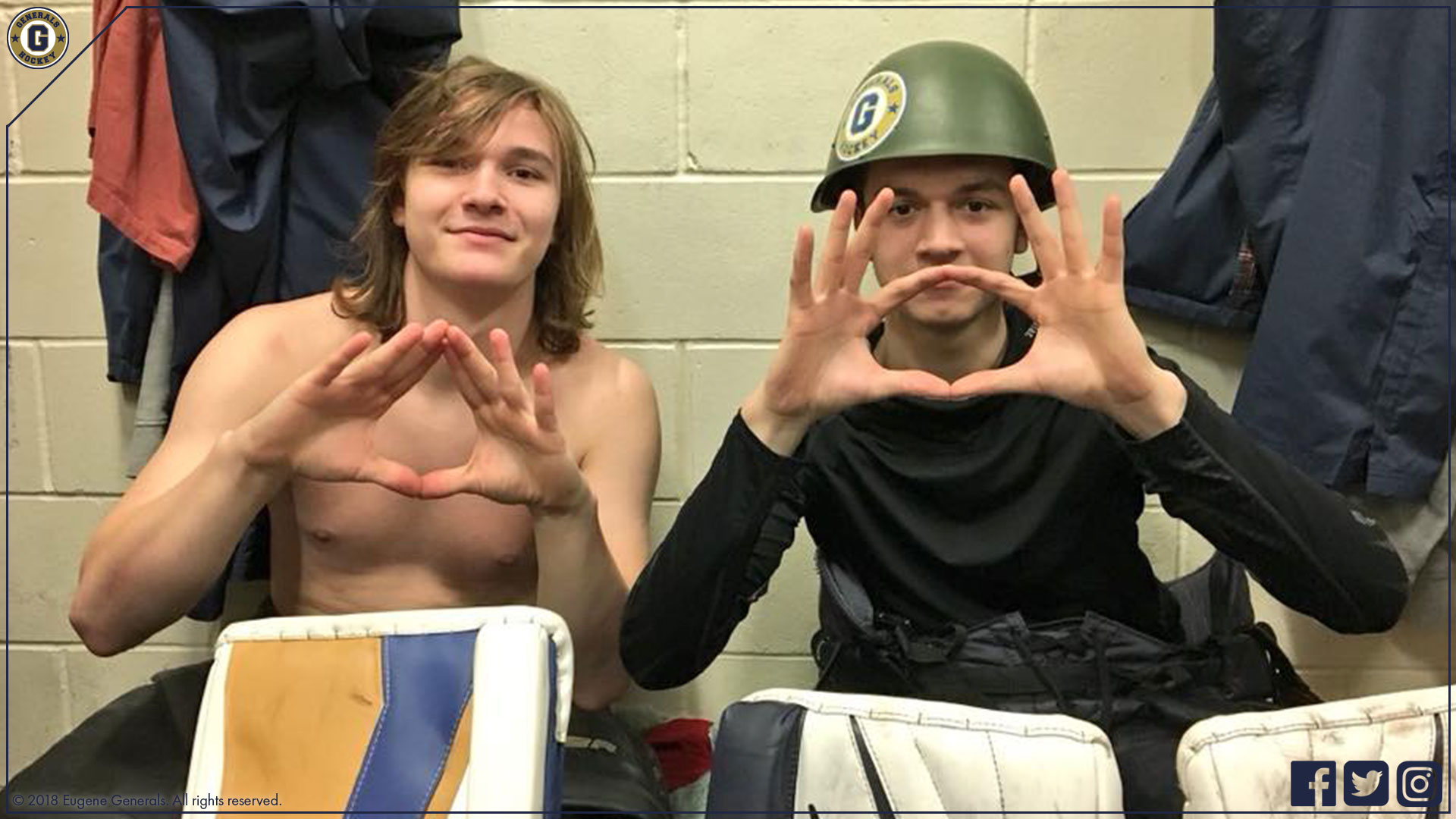 Alexakis started the showcase on Saturday with a 21-save shutout performance against the Syracuse Stars while Frantz followed suit later in the evening with a 26-save shutout vs. the Jersey Shore Whalers. Full stats: 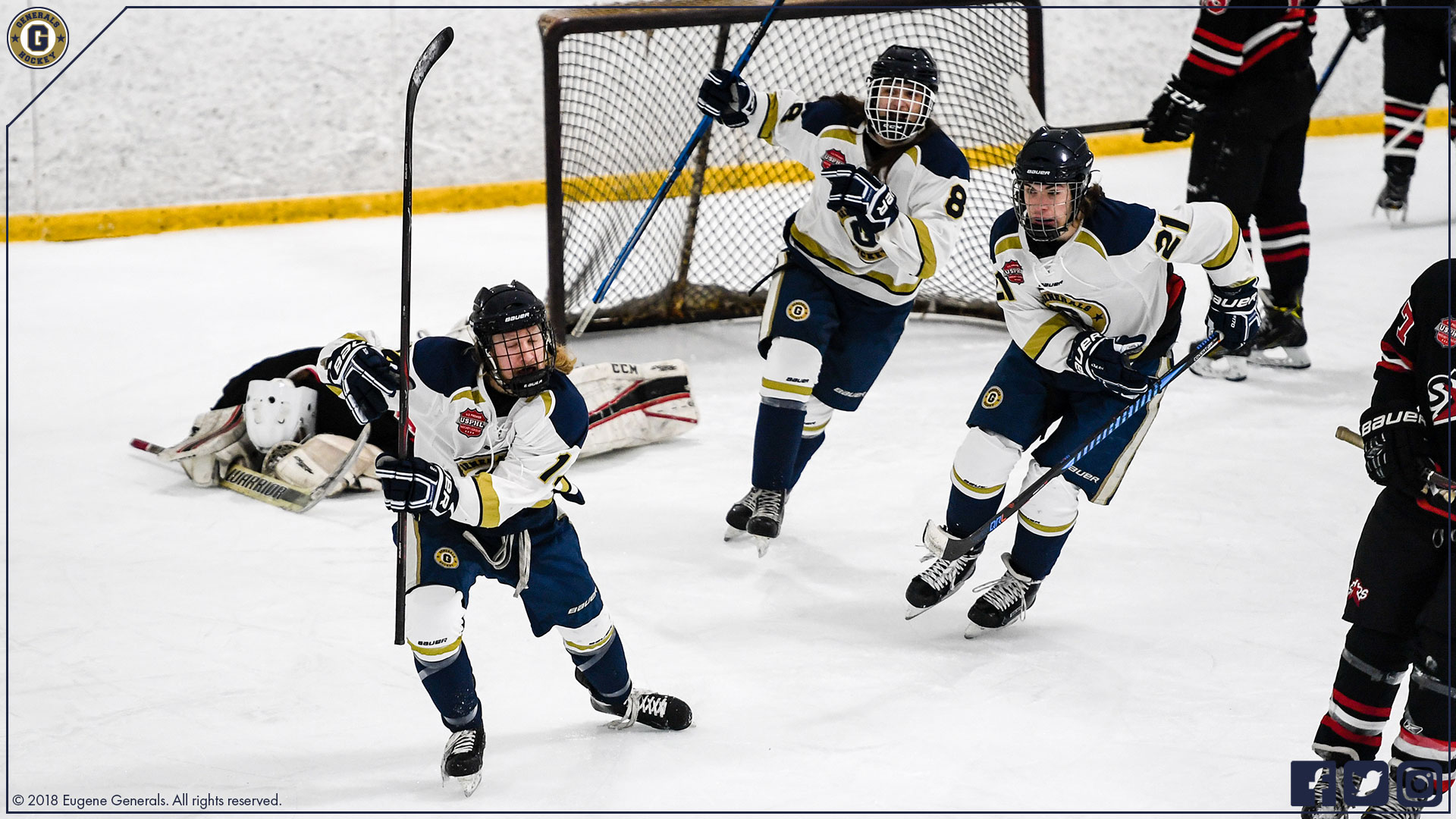 Lots of team accomplishments were checked off this past weekend, but the moment that had the organization buzzing the most was when veteran defenseman and assistant captain Kenneth Griffin netted his first-career junior hockey goal in the team's 4-0 win over the Syracuse Stars.

Griffin, who skated with the team during the 2015-16 season and rejoined the team earlier in the 2017-18 season, has been one of Eugene's go-to guys both on and off the ice. In addition to the calming leadership that he provides on the ice, the Alaskan has brought an added element of focus and drive to a young Eugene team. His coaches and billet family will quickly attest to Griffin's sense of maturity which is beyond his years, and he is beloved by teammates and fans alike, so it was no surprise to hear the roar from the Eugene bench when Griffin finally lit the lamp last weekend in Massachusetts.

With the 2018 USPHL Winter Showcase now concluded, the team has returned to the Emerald Valley to resume play in the Northwest, starting with a two-game series against the Everett Jr. Silvertips on Friday, January 19th and Saturday, January 20th. Both games are scheduled to start at 7:30pm PST at The Rink Exchange. The matchup will mark the first-ever meetings between the two teams in Eugene.

Saturday's game vs. the Jr. Silvertips marks "Zombie" Night and the 3rd annual Eugene Generals Blood Drive, hosted by Lane Bloodworks. All fans that donate blood between 4:00pm and 7:00pm at The Rink Exchange on Saturday, January 20th will receive free admission to that evening's game and also be automatically entered to win a one-of-a-kind Generals "zombie" jersey, which will be unveiled next week.