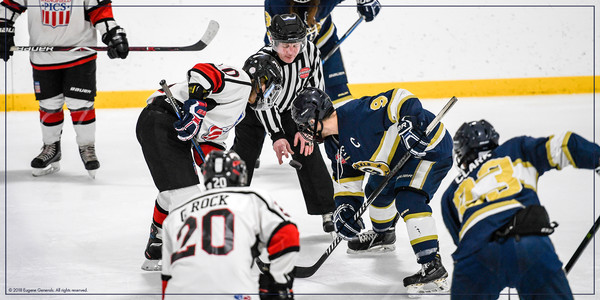 The Eugene Generals suffered their first loss at the USPHL Winter Showcase on Sunday morning as they were defeated by the Springfield Pics, 2-0.

Coming off a pair of shutout wins the day prior (4-0 vs. Syracuse Stars | 3-0 vs. Jersey Shore Whalers), Eugene entered Sunday eager to keep the shutout streak alive and move to a perfect 3-0-0 on the weekend.

However, despite outshooting the Pics, 30-16, in the first period, it was Springfield who scored the only goal of the the first 25 minutes as a turnover in the Generals’ defensive zone led to a 1-on-0 opportunity for Gavin Rock who calmly finished nicely past Generals goaltender Jamie Frantz to put the Pics ahead, 1-0.

Another odd-man rush hurt the Generals in the second period as Brett Geoffroy buried a two-on-one opportunity to double Springfield's lead with 11:59 left in regulation.

That would be all the scoring either side could muster as Springfield goaltender Nick Schulte was superb in net stopping all 43 shots faced on the afternoon to net the shutout while Eugene's Jamie Frantz was solid as well stopping 28 of 30 Springfield shots.

The Generals now look ahead to an evening matchup with the Beijing Shougang Eagles in what will be Eugene’s fourth game in a 36-hour span. The puck is scheduled to drop between the Generals and Eagles at 4:40pm EST with video coverage to be provided via HockeyTV.