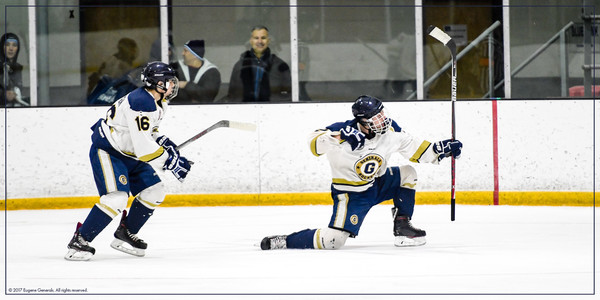 The Eugene Generals (5-9-1) wrapped up Sunday in style thanks to a come-from-behind, 2-1 win over the Boston Bandits (13-8-1) at Skate 3 Ice Arena in Tyngsborogh, Massachusetts.

After falling to the Hampton Roads Whalers (16-2-1) by a final score of 4-2 just hours before, the Generals took the ice at Skate 3 for the second time of the day to face off against a Bandits side that entered the day in second place in the Elite's North Division.

From the opening puck drop, there was no mistaking that it would be a physical and penalty-filled affair as the game’s first eight minutes saw plenty of hard hits and a handful of penalties awarded.

Tempers began to settle midway through the second period, and the Bandits would open the scoring at the 21:09 mark thanks to team-leading scorer Eric Steeves who netted his 20th goal of the season to put Boston ahead.

The Bandits would carry that one-goal advantage into the second period, but it would be wiped away by Eugene’s Alex Clark who buried a low, hard shot at the 9:08 mark for his team-leading 10th goal of the season to tie the game at 1-1.

Nine minutes later, the Generals knocked the Bandits back on their heels and jumped out to their first lead of the game as Dakota Henn buried a wrist shot from the high slot for his 6th goal of the season.

Generals goaltender Christopher Alexakis shut the door from there in what was a very impressive 27-save performance in net to earn his second win of the season, both of which have come this weekend at the Islanders Hockey Club Showcase.

With the win, the Generals move to 2-2-0 at the I.H.C. Showcase while also surpassing the franchise’s USPHL Showcase Series win total from last season (2016-17: 3-4-1 in two USPHL Showcase Series events). That total excludes a 2-1 win over the Florida Eels in an exhibition game at last month's Chicago Showcase.

Eugene wraps up play at the I.H.C. Showcase on Monday morning with a matchup against the Atlanta Jr. Knights at 10:50am EST at Gallant Arena. Live video coverage of every USPHL Showcase Series game is available via HockeyTV while live stats are available at USPHL.com.

The next home games for the Eugene Generals are scheduled for Friday, November 17th and Saturday, November 18th vs. Coeur D'Alene Hockey Academy. Both games are scheduled to start at 7:00pm PST at The Rink Exchange in Eugene, Oregon. Tickets are on sale now at EugeneGenerals.com.