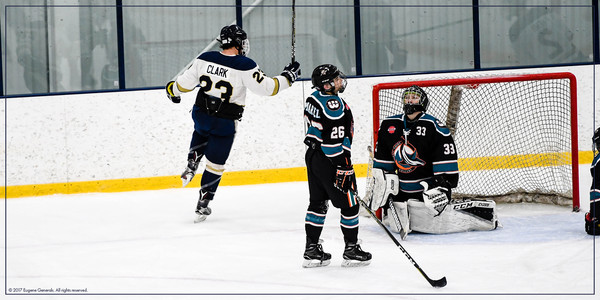 The Eugene Generals (4-8-1) netted the team's first win of the Islanders Hockey Club Showcase on Saturday morning thanks to a 3-1 win over the Jersey Shore Whalers (6-13-0) at Gallant Arena on the campus of Merrimack College in Andover, Massachusetts.

Both teams entered Saturday's matchup hungry for a win after the Generals fell to the league-leading Charlotte Rush the day prior while the Whalers suffered a pair of losses on Friday, first to the Richmond Generals and later to the Beijing Shougang Eagles.

Eugene's Alex Clark started the scoring at the 14:26 mark of the first period as he rifled home a one-timer off a perfect feed from Jackson Baughman to beat Whalers goaltender Lane Skon and put the Generals in front, 1-0.

The Whalers responded just over five minutes later as Evan McNamara punched home a loose puck in the Eugene crease to tie the game at 1-1, but it would take only 107 seconds for the Generals to regain the lead as Dakota Henn pickpocketed a Whalers defenseman before calmly burying a backhanded shot to put the Generals back ahead, 2-1.

In the second period, Clark added some insurance and capped the scoring at the 21:45 mark with his second goal of the game, another beautiful finish that saw the Wasilla High School product shed a Whalers defenseman before burying a top shelf finish past Skon in net.

Clark's two goals on Saturday add to his team-leading total of nine overall goals on the season, four of which have come in USPHL Showcase Series play.

Making just his second start of the season, Generals goaltender Christopher Alexakis stopped 29 of 30 shots faced to pick up his first win of 2017-18. The Alaskan has stopped 70 of 75 shots in his two appearances this season (vs. Charlotte Rush - 11/10) after missing the first two months of play due to a lower body injury.

A doubleheader awaits the Generals on Sunday as they'll face off against the Hampton Roads Whalers (14-2-1) at 9:50am EST before later taking on the Boston Bandits (13-7-0) at 8:50pm EST. Both games are scheduled to be played at Skate 3 in Tyngsboro, Massachusetts. Live video coverage of every USPHL Showcase Series game is available via HockeyTV while live stats are available at USPHL.com.

The next home games for the Eugene Generals are scheduled for Friday, November 17th and Saturday, November 18th vs. Coeur D'Alene Hockey Academy. Both games are scheduled to start at 7:00pm PST at The Rink Exchange in Eugene, Oregon. Tickets are on sale now at EugeneGenerals.com.