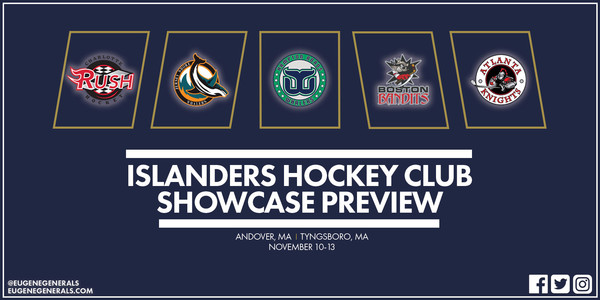 The second USPHL Showcase Series event of the season is less than one week away as the Eugene Generals (3-7-1) will travel to Massachusetts this weekend to play five games in four days at the 2017 USPHL Islanders Hockey Club Showcase.

Eugene will be making the cross-country trip nearly one month after the team participated in its first showcase of the season, the Midwest Showcase in Illinois. There, the Generals posted a 2-2-0 overall record with wins over the Richmond Generals (4-3) and Daytona Racers (6-2) while also netting a 2-1 win over the Florida Eels in an exhibition game.

In the month since, the Generals have gone winless in a trio of games against collegiate opponents having dropped a two-game series to Western Washington University (3-1, 7-5) before falling to Arizona State (2-1) on October 26th.

While the promising performances of the Midwest Showcase may have been slightly diminished by the recent performances against much bigger and more experienced collegiate opponents, Generals Head Coach Justin Kern says his team is ready and eager for the opportunity ahead in Massachusetts.

"I think this will be a good challenge for the team," said Kern. "We'll be playing a lot of teams that we know a little bit about - some that we've even played in the past and have an idea of how they're coached - but we know that they'll all be good, competitive teams."

"It'll be a good chance for us to step up our game and prove that we belong with the other junior programs out there. Obviously, we have a different schedule so we can't quite see where we stack up against those teams until we actually play them, so it will be a very welcome challenge for us."

As the name not-so-subtly infers, the Islanders Hockey Club Showcase is hosted by the Islanders Hockey Club, the NCDC affiliate of the Eugene Generals, and it is the second of three USPHL Showcase Series events on the schedule for the Generals this season. Eugene will conclude its 2017-18 showcase schedule in January with a trip back to Massachusetts to participate in the Winter Showcase.

A total of five venues will together tackle the whopping 100 games scheduled for the 2017 Islanders Hockey Club Showcase:

Note: Home to the NCAA Division I University of Massachusetts Lowell Riverhawks men's ice hockey team, members of the Hockey East Association. Earlier this year, the Tsongas Center served as the host for the 2017 NWHL Isobel Cup finals, and it was previously the home arena for AHL's Lowell Lock Monsters and Lowell Devils. Capacity: 6,003.

Note: Housed inside of the S. Peter Volpe Athletic Center on the campus of Merrimack College, Lawler Rink primarily serves as the home to the NCAA Division I Merrimack College Warriors men's and women's ice hockey teams. Capacity: 2,549.

Note: Gallant Arena is housed adjacent to Lawler Rink inside of the S. Peter Volpe Athletic Center. The arena is named for Richard Gallant, President of the Islanders Hockey Club, and his wife, Susanna.

Note: A three-rink facility, Skate 3 is the primary home of the Islanders Hockey Club as well as multiple youth programs.

Note: Opened in late-November of 2016, the I.H.C. Showcase comes less than two weeks before the Essex Sports Center will be celebrating its first full year of operation. 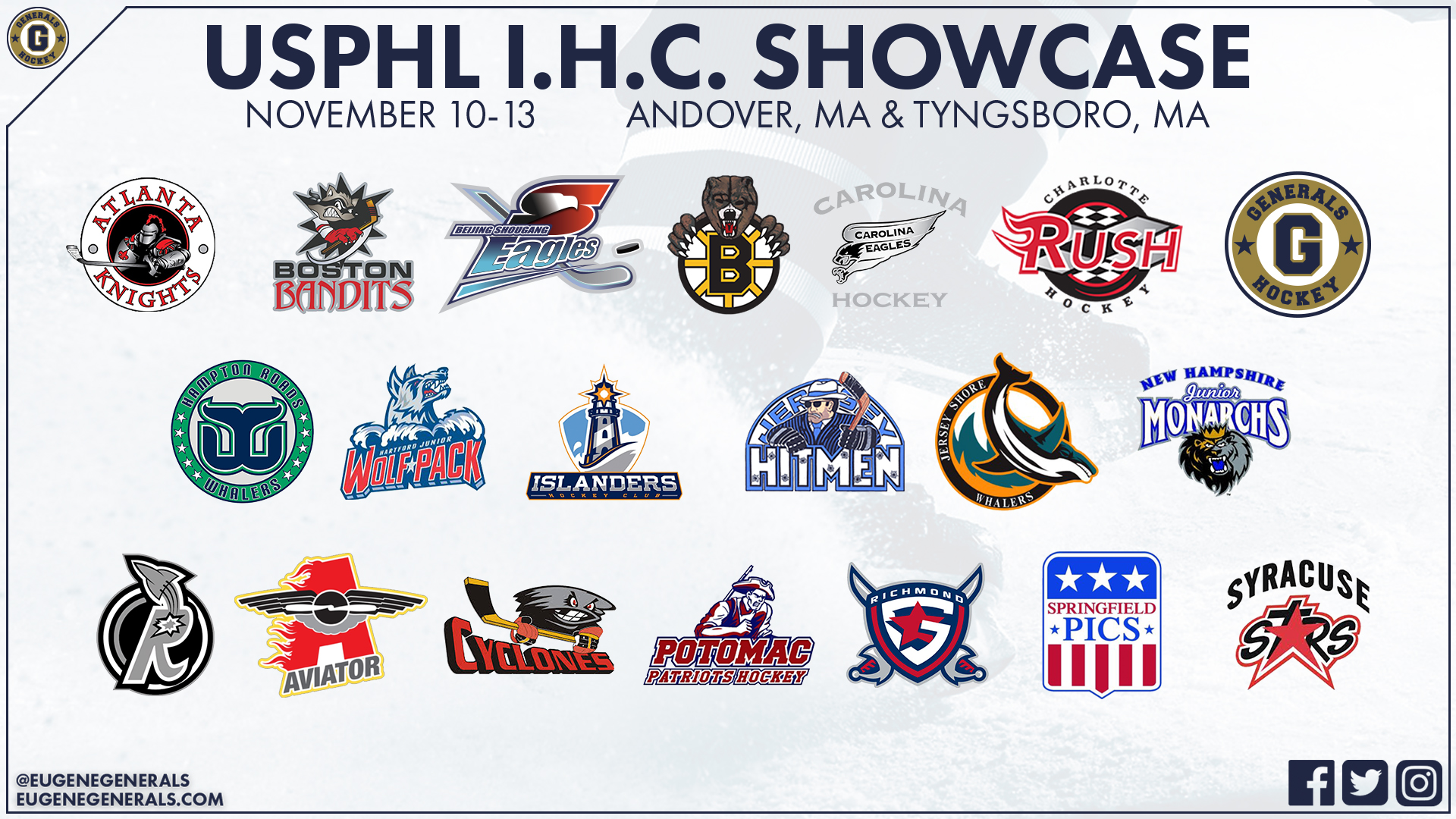 The 2017 I.H.C. Showcase is one of the most robust and well-attended events on the USPHL Showcase Series schedule. The event will feature all eleven teams from the National Collegiate Development Conference (NCDC) along with teams from the USPHL's Premier, Elite, 18U and 16U leagues. Along with the Generals, franchises from the Mid Atlantic, North and Southeast Divisions of the Elite League will be in attendance.

About the Team: The 2015-16 season won't soon be forgotten by junior hockey fans in Charlotte, and the 2017-18 season is shaping up to be an equally memorable year for the Rush. After the program claimed last year's Elite League championship while its USP3 team made it all the way to the semifinals, and the Rush have retooled and are once again a force to be reckoned with at multiple levels (Premier record: 15-1-2, 1st in Southeast). The Rush will arrive in Boston winners of six straight and nearly one month removed from their last defeat, a 4-3 loss to the Islanders Hockey Club back on October 14th at the Midwest Showcase. The Rush posted a 2-2-0 overall record at the Midwest Showcase, a minor speedbump in what has otherwise been a smooth season for Charlotte thus far. Adding to an already potent lineup that has scored the second-most goals in the Elite League (87), last season's leading scorer Mark Kishko was recently moved from Charlotte's Premier team back to its Elite team and has scored in each of his four games since the return. Including Kishko, the Rush return eleven players from last year's formidable USP3HL team. Forward Joshua Hemmer leads the league in power play goals (6) and forward Jackson Ross, who only has five total goals on the season, is tied for the league lead in shorthanded goals (3). Goaltender Andrew Keating is currently second in the Elite League in save percentage (.946), second in minutes played (580), tied for first in wins (8) and tied for first in shutouts (3).

Note: The Rush defeated the Generals in the only previous meeting between the two franchises, a 3-1 win for Charlotte during the 2017 USPHL Playoffs in Marlborough, Massachusetts.

Notes: It's been a season of streaks so far for Jersey Shore. After starting the year losing four of team's first five games, the Whalers responded by winning four of their next five, but they have since lost four of five including most recently suffering a two-game sweep at the hands of their in-state rivals, the Jersey Hitmen. Of the Whalers' 22 rostered players, 21 are from New Jersey with Lake Skon (Palmetto, FL) being the only outlier. The Floridian has established himself as Jersey Shore's top netminder as he is currently third in the Elite League in total saves (302). Returning only two players from last year's USP3HL team has contributed to the Whalers using 32 total players (28 skaters, 4 goaltenders) through the season's first fifteen games, and they've struggled to find their mojo on attack as the team has only mustered 37 goals so far this season. Jersey Shore has enjoyed a steady stream of expansion since the first USPHL junior team founded in 2014. Two years later, the program grew to include teams in the USPHL's 18U, 16U, and 16U Futures leagues. This past offseason, the Whalers underwent another growth period as the USPHL granted them a second junior team that currently plays in the USPHL's Premier League.

Notes: Like the Charlotte Rush, Hampton Roads has consistently proven to be one of the South's top Tier III junior hockey programs (Premier record: 13-3-0, 2nd in Southeast), and the 2017-18 season has been no exception thus far. The Whalers will enter the I.H.C. Showcase having won nine of their last ten games with their only loss coming on October 28th vs. Carolina (2-1). Four of the team's top six scorers (Lorenz, Eastlack, Cavanagh, Dienna) and both of its top netminders (Yasinski, Horn) are returners from last year's squad as twelve total players are back in Hampton Roads from last year's USP3HL team. Those aforementioned goaltenders have been arguably the biggest reason for the Whalers' early season success as Yasinski's eight wins are currently tied for the league lead (Andrew Keating) while Horn's .952 save percentage leads the league outright (minimum 300:00 minutes played). This will be the Whalers' second USPHL Showcase Series event of the season after previously posting a 4-0-0 record at the Midwest Showcase with wins over the Florida Jr. Blades (5-3), Tampa Bay Juniors (4-1), Daytona Racers (7-3) and Jersey Hitmen (6-3).

Note: The Whalers defeated the Generals in the only previous meeting between the two franchises, a 6-1 win for Hampton Roads at the 2016 I.H.C. Showcase.

About the Team: Having joined the USPHL from the EHL this past offseason, the Bandits are the only program of the five that the Generals will face in Massachusetts that fields teams at the NCDC, Premier, and Elite levels. Boston's Elite team started strong in the new setting by opening the season with eight straight wins including perhaps the USPHL's most impressive series performance to date, a two-game sweep of the New Hampshire Jr. Monarchs on the season's opening weekend. However, the Bandits have posted 4-7-0 record since that hot start and they've been plagued by penalties in the process. Boston's 365 PIMs are second most in the league (N.J. Rockets - 371) and their 77.2 PK% is fourth-worst, but forward Eric Steeves has done his best to single-handedly cancel out the Bandits' penalty problems. Steeves' 19 goals are second most in the Elite League (Ryan Racy - New Hampshire - 22) while also being ten more than his next closest teammate, a feat that only one other player in the Elite league can claim (Alex Robinson - Carolina). This will be the second consecutive weekend that the Bandits will travel to the Andover area after splitting a two-game series with the Islanders Hockey Club the weekend prior.

Notes: It's been a roller coaster ride for the early portion of the junior hockey season in Atlanta as the Jr. Knights have been a tough team to figure out through the first two months of play. Atlanta's only prior USPHL Showcase Series trip this season saw the team post a 3-1-0 record that included an impressive 2-1 win over the Mid Atlantic Division-leading Jersey Hitmen. However, the Jr. Knights have failed to win a game since as they'll arrive in Massachusetts on a five-game losing streak and fresh off a two-game series against Richmond that saw Atlanta outscored by a 12-2 margin. No returning goaltenders from last year's team has led the Jr. Knights to use five different netminders through the team's first 19 games, but goaltender Barrett Rosser looks to have taken over the primary puck-stopping duties having started seven of the team's last eight games since being moved down from Atlanta's Premier team. Atlanta's power play has struggled hitting on only 8.5% of its chances (2nd-worst in Elite League), a potential byproduct of the fluidity that has existed in Atlanta's roster as 33 different skaters have played for the Jr. Knights this season.

Note: The Jr. Knights defeated the Generals in the only previous meeting between the two franchises, a 3-1 win for Atlanta at the 2016 I.H.C. Showcase.

The next Eugene Generals home games are Friday, November 17th and Saturday, November 18th vs. Coeur D'Alene Hockey Academy. Both games are scheduled to start at 7:00pm PST at The Rink Exchange in Eugene, Oregon. Tickets are on sale now at EugeneGenerals.com. Stay tuned to EugeneGenerals.com and follow the Generals on Facebook, Twitter, Instagram and Snapchat for more updates, information and behind-the-scenes content throughout the 2017-18 season.