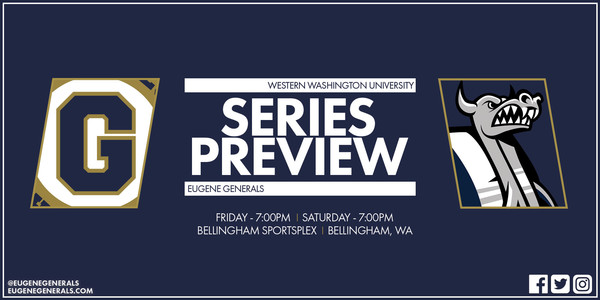 The Eugene Generals (3-4-1) will travel north this weekend for a two-game road series against Western Washington University (4-1-1) to be played Friday and Saturday night at the Bellingham Sportsplex in Bellingham, Washington.

While the series between the two teams was originally scheduled to take place next weekend, WWU Head Coach Larry MacDonald reached out to the Generals organization earlier this week upon finding an opening in the ice time schedule at the Bellingham Sportsplex. After a quick conversation to hammer out logistics, the two sides agreed to move the much anticipated matchup to this upcoming weekend.

Eugene enters the two-game series less than one week removed from participating in the USPHL Chicago Showcase, the team's first USPHL Showcase Series event of the 2017-18 season. During the team's time in Chicago, the Generals posted a 2-2-0 record while also picking up a 2-1 win over the Florida Eels in an exhibition game.

"Being that they're coached by Larry MacDonald, we know that they're a well-run program," said Generals Head Coach Justin Kern. "I expect the Vikings to be big and physical with their age and size difference, but I just want our team to come out and play like we did in some of our better games in Chicago. I was very happy with our performance there, so if we can continue to have good puck movement through the neutral zone, quick escapes from our defensive zone, and then make something happen in the offensive zone then I believe that we'll have a good showing."

Head Coach Larry MacDonald is in his second season at the helm in Bellingham after posting a 11-13-2-0 record in his inaugural season. MacDonald is no stranger to the Generals as his sons Robert (2012-14) and Mark (2012-15) each played for the Bellingham Blazers, former members of the Northern Pacific Hockey League (NPHL). The Generals played in the NPHL for the team's first eleven years of existence. Both Robert and Mark MacDonald are current members of the WWU Vikings.

Total Team Effort - The scoring load has been spread equally across the Eugene roster in the season's first month of play, and last weekend in the Midwest was no exception. Ten different goal scorers combined to light the lamp a total of fourteen times for the Generals at the USPHL Chicago Showcase.