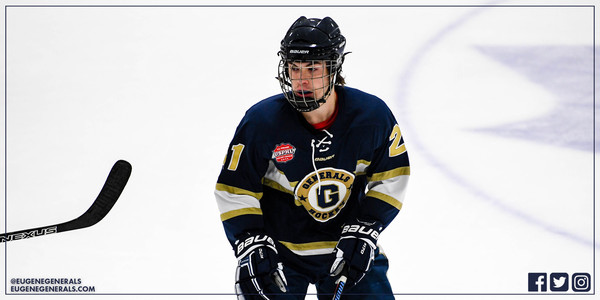 The Eugene Generals (2-4-1) were defeated by the Florida Eels (7-1-0) by a final score of 4-1 on Saturday morning at the USPHL Chicago Showcase in West Dundee, Illinois.

The two teams were facing off for the second time in less than twenty-four hours after the Generals and Eels played in an exhibition game against one another the night prior, a 2-1 victory for the Generals.

Saturday proved to belong to the Eels, though, as they would strike first thanks to Daniel Merida as he pounced on a loose rebound to put Florida ahead, 1-0, at the 17:52 mark.

Eugene would answer at the 22:33 mark as Nathan Leach netted his first career goal against a junior hockey opponent on a breakaway opportunity, tying the game at 1-1.

However, the Eels would be heard from again just the break as Anthony Sozio lit the lamp with just 0.9 seconds remaining in the period tothe Eels back in front, 2-1.

Florida would make it 3-1 early in the second period as Cade Swygert scored at the 2:35 mark, and Jake Court netted a late insurance goal with just forty seconds left in regulation to seal a 4-1 win for the Eels.

As with all USPHL Showcase Series events, the game format for the USPHL Chicago Showcase includes two 25-minute periods as opposed to the traditional format of three 20-minute periods.

Excluding the exhibition game against the Eels, Saturday’s loss drops the Generals to 1-2-0 at the 2017 USPHL Chicago Showcase after falling to the Potomac Patriots, 2-1, on Thursday before bouncing back with a 4-3 win over the Richmond Generals on Friday.

The Generals now look ahead to the second game of Saturday’s doubleheader and the team’s final game of the USPHL Chicago Showcase, a matchup with the Daytona Racers at 2:40pm PST at Canlan Ice Sports. Video coverage will be available via HockeyTV with live stats available via USPHL.com.