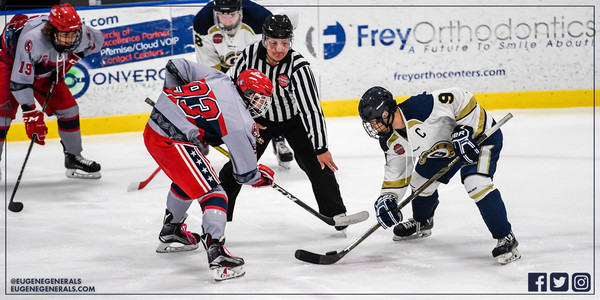 The Eugene Generals (1-3-1) were defeated by the Potomac Patriots (1-7-1) by a final score of 2-1 on Thursday afternoon at the Leafs Ice Centre in West Dundee, Illinois.

After arriving in the Midwest the day prior, the Generals took the ice against the Patriots for the first-ever meeting between the two franchises. Each team was playing in their first of four games at the USPHL Chicago Showcase this week.

As with all USPHL Showcase Series events, the game format for the USPHL Chicago Showcase includes two 25-minute periods as opposed to the traditional format of three 20-minute periods.

After a scoreless first period, Potomac started the scoring seconds after the opening draw of the second period thanks to a fortunate bounce that lead to an easy tap-in and a 1-0 lead for the Patriots.

The Generals responded to tie the score at 1-1 minutes later as defenseman Dakota Henn dropped his shoulder to beat a Potomac skater before finishing nicely past Jack MacKinnon in net.

However, Potomac would regain the lead midway through the period as a hard shot from the top of the circle snuck past Generals goaltender Jamie Frantz, and that would prove to be the game-winner as the Patriots would earn the 2-1 win.

The Generals now must look ahead to a doubleheader on Friday, starting with a matchup with a matchup against the Richmond Generals (5-2-0) at 6:10am PST at the Leafs Ice Centre. Later in the day, the Generals will travel south to Canlan Ice Sports to play in an exhibition game at 2:50pm PST against an opponent that is yet to be determined.

You can watch Friday morning’s game via HockeyTV and follow live stats via USPHL.com.