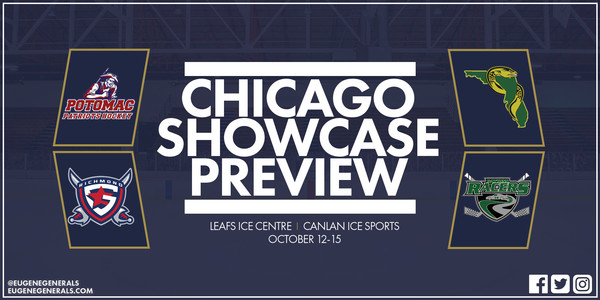 This upcoming weekend will bring the first USPHL Showcase Series event of the season for the Eugene Generals (1-2-1) as the team will travel to the Midwest to play four games in three days at the 2017 USPHL Chicago Showcase.

The four-game stretch will be the first time this season that the Generals will take on USPHL Elite League opponents after starting the 2017-18 season with games against the Everett Jr. Silvertips 18U AAA team and the University of Oregon's ACHA team.

A pair of venues will be tag-teaming the ice duties for the event as the Leafs Ice Centre and Canlan Ice Sports are the official host sites for the 2017 USPHL Chicago Showcase. Each facility is located approximately 45 minutes outside of Chicago with Leafs Ice Centre located to the northwest of the Windy City while Canlan Ice Sports is located to the southwest.

While this will be the Generals' first visit to Canlan Ice Sports, the franchise is already familiar with the Leafs Ice Centre as the facility served as the exclusive host of the 2016 Midwest Showcase where the Generals posted 3-0-1 record in four games played, including netting the team's first-ever win in a USPHL Showcase Series game.

Note: Leafs Ice Centre is the home facility of the USPHL's Chicago Cougars. 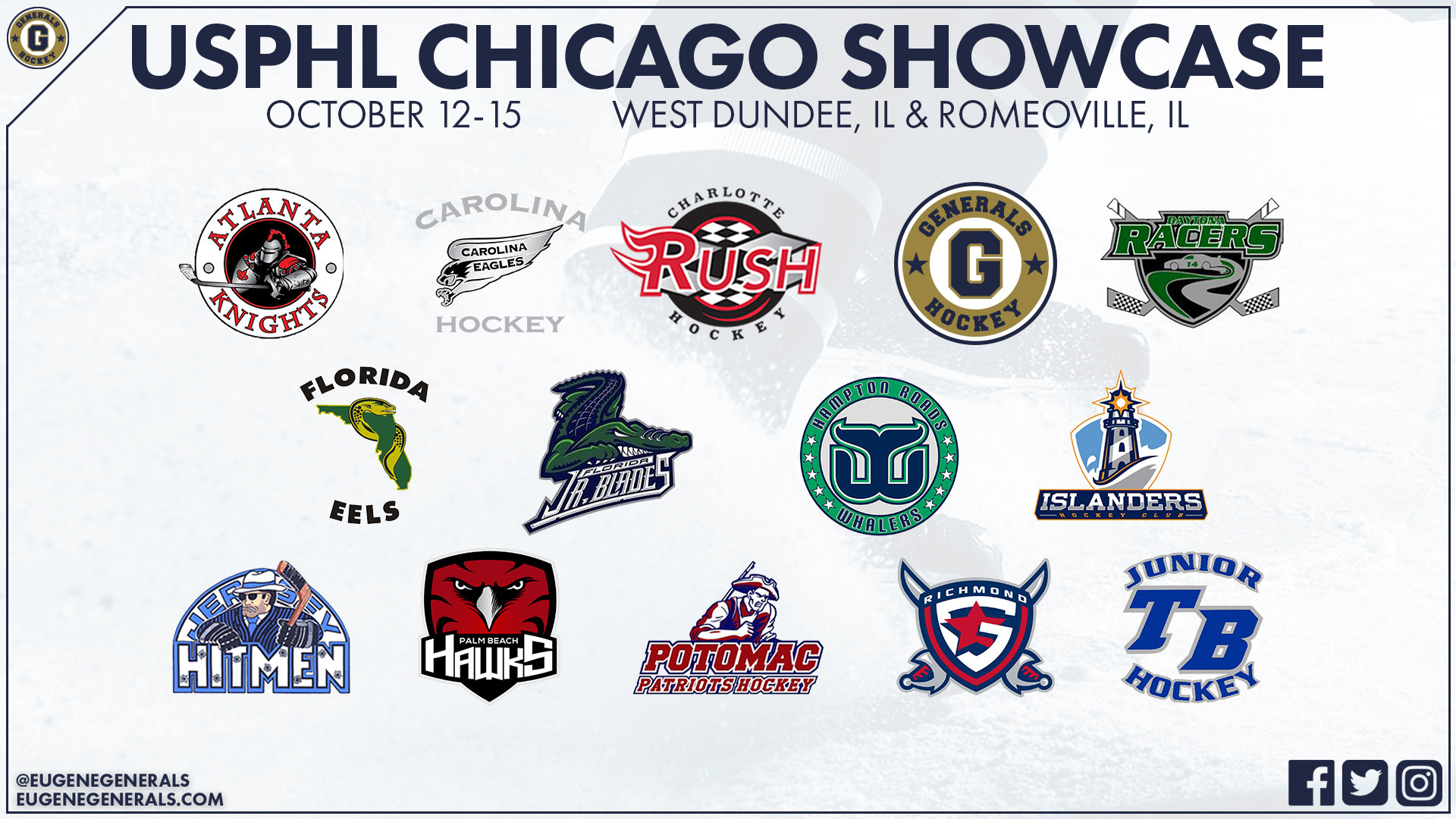 The 2017 Chicago Showcase will feature both Premier and Elite League teams. Along with the Generals, franchises from the Florida, Mid-Atlantic, North and Southeast Divisions of the Elite League will be in attendance.

Note: All four of the Generals' opponents also field teams in the USPHL's Premier League and therefore possess the opportunity to move players from their Premier team to their Elite team, something that the Generals experienced firsthand in their first-ever USPHL Showcase Series event last season (I.H.C. Showcase).

About the Team: The 2016-17 season was one to forget for the Patriots as they posted a 1-42-1 record, and 2017-18 hasn't started much better as the team currently stands at 0-7-1 on the season. Despite that, there's still reason for optimism on the banks of the Potomac as four of the Patriots' eight losses this season have been by two goals or less. A big reason behind that has been some resilient goaltending as Jared Cable (.924 SV%) and Jalen Greene (.918 SV%) have battled to keep the Patriots competitive despite having been outshot by more than a two-to-one margin on the season. Still, the Patriots attack must show signs of improvement if they want to net their first win this weekend as Potomac has failed to score more than two goals in any of their eight contests so far this season.

About the Team: The USPHL’s “other” Generals have been one of the league's steadiest and consistently solid franchises over the past few seasons, and early signs indicate that trend will continue through 2017-18. Despite returning only three players from last season's USP3HL team (Janofsky, Owens, Smith), the Generals appear to have once again successfully retooled their roster with a diverse lineup that includes players from eleven different states (and one import from Finland). Richmond opened up the season with a pair of impressive three-goal victories over the Carolina Eagles before being swept in a two-game series by defending South Division champion Charlotte despite outshooting the Rush by a 82-69 margin over the two games. The Generals would bounce back two weeks later, though, as they converted a two-game sweep of their own in a home-and-home series with the Potomac Patriots. Though six games may be a small sample size, Richmond's power play unit has been one of the league's best so far this season as they have converted on 27.5% of power play opportunities, good for third-best in the Elite League.

Note: The Generals were the only team to beat the Florida Jr. Blades during the regular season last year. The Jr. Blades would later go on to win the 2016-17 USP3HL Championship ... Like Eugene, the Chicago Showcase will be Richmond's first game since October 1st after enjoying a bye last weekend.

About the Team: After spending the majority of last season hovering around the .500 mark, the Eels have stormed out to a perfect 5-0-0 record to start the 2017-18 season while threatening to unseat the Florida Jr. Blades as the top team in the sunshine state. The effects of Hurricane Irma caused a number of game postponements throughout the Florida Division, but the chaos hasn't rattled the Eels as they are outscoring opponents by a 31-9 margin. Those impressive numbers do come with a grain of salt, though, as four of the Eels' five games this season have come against the last place Daytona Racers. Head Coach Frank Scarpacci has leaned heavily on imports this season as seven players on the Eels Elite team's roster hail from outside the United States, more than any other Elite League team (next closest: Palm Beach, 4). Florida has been strong on the penalty kill so far this season as their PK unit ranks fifth in the league at 92.9%.

Note: Hurricane Irma may have prevented the start of hockey season on Florida, but it didn't stop the Eels from going to work as they helped gather and donate supplies for those in need following the devastating effects of Hurricane Harvey in Texas.

About the Team: Eight games down and the Racers are still stuck at the starting line. Entering the Chicago Showcase, Daytona is still searching for the team's first win of the season after having played the Florida Eels and Palm Beach Hawks four times each, all regulation losses. Fielding a very, very thin lineup has hurt the Racers mightily as they've been outscored 60-20 so far this season, and Daytona will likely aim to make some last-minute roster additions and adjustments heading into this weekend's trip to the Midwest. It is anybody’s guess who will be between the pipes this weekend for the Racers as Daytona has started three different netminders this season, but new addition Nolan Hawkes may be the best bet after putting up a pair of impressive performances last weekend in his debut with Daytona. Hawkes stopped 60 of 64 shots faced in the Racers' 4-0 loss to the Eels last Friday before posting 45 saves the following night (also against the Eels) in a 4-3 loss, a game that the Racers led 2-0 at one point.