Generals Downed By Ducks In Shootout, 5-4 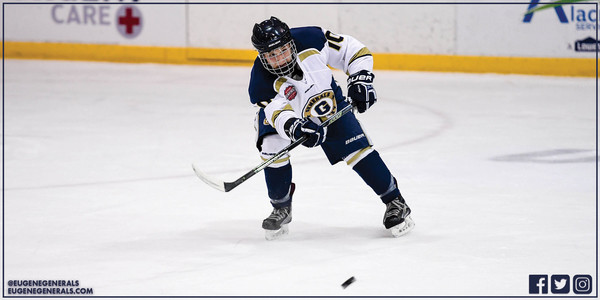 The Eugene Generals (1-2-1) fell to the Oregon Ducks in a shootout by a final score of 5-4 on Saturday night at The Rink Exchange in the finale of a two-game series between the two teams.

Oregon started the scoring for the second night in a row as the Ducks took a 1-0 lead midway through the opening period, but the lead would only last a matter of moments as Generals forward Nathan Leach netted his first career junior hockey goal soon afterwards to tie the game at one goal apiece.

In the second period, forward William Wallace followed in Leach's footsteps as he scored his first-ever junior hockey goal to put the Generals ahead, and forward Alex Clark later scored his third goal of the weekend to give the Gens a 3-1 lead after two periods of play.

The Ducks' deficit was cut back to one just past the midway point of the third period, but Eugene's two-goal cushion was quickly restored as defenseman Sebastian Llaneras rocketed home a hard slap shot for his first goal as a General to put Eugene ahead, 4-2, with less than five minutes left in the third period.

That proved to be plenty of time for the Ducks, though, as mental missteps by the Generals led to a pair of Oregon goals in the final 2:35 of regulation to eventually force overtime.

After a scoreless five-minute overtime period, the two teams advanced to a five-man shootout where the Ducks would outscore the Generals, 2-1, to ultimately pick up the dramatic 5-4 win.

The Generals now prepare to travel to the USPHL Chicago Showcase in two weeks where they will face off against the Potomac Patriots, Richmond Generals, Florida Eels and Daytona Racers.

The next home game for the Generals will be against the Arizona State Sun Devils on Thursday, October 26th at 6:00pm PST at The Rink Exchange in Eugene, Oregon. Tickets are available online at EugeneGenerals.com or in-person immediately before the start of the game at the Eugene Generals Box Office, located at The Rink Exchange.