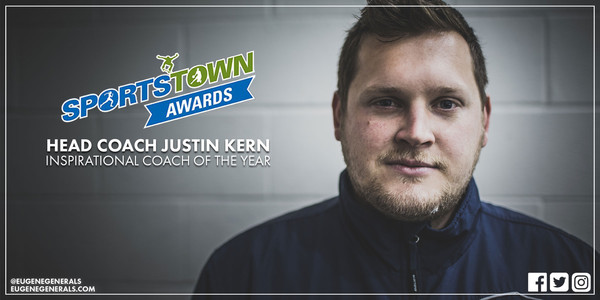 Eugene Generals Head Coach Justin Kern has been named as a finalist for the Inspirational Coach of the Year Award for the upcoming 2017 SportsTown Awards.

Kern guided the Generals to a 34-7-3 record this past season, the team’s first as members of the United States Premier Hockey League. Following the regular season, the Generals swept the Seattle Ravens in the Pacific Division Championship Series to become Pacific Division Champions before then competing in the USPHL Playoffs in Marlborough, Massachusetts where the team came just short of advancing out of pool play.

Having just completed his second full season as the team’s bench boss, Kern has held the position since the midway point of the 2014-15 campaign. The Generals have posted a 64-45-4-1 overall record with Kern as Head Coach, including a combined 60-29-3-0 record over the last two full seasons.

Kern is also a former Generals player himself having been a member of the very first Generals team in 2005-06. The Alaska native played for the team for two seasons (2005-07) before attending Corcordia University where he obtained a business marketing degree.

The SportsTown Awards will be held Thursday, June 1st from 6:00pm to 9:00pm at the Valley River Inn in Eugene, Oregon. Tickets to the event go on sale May 8th and more information is available at EugeneCascadesCoast.org/SportsTown-Awards.

The Eugene, Cascades & Coast Sports Commission is a marketing organization under Travel Lane County. Their mission is to create a cohesive sports community within the County by connecting venue owners, managers, schools, event providers, and our hospitality community to sports event planners in order to foster the growth of sports events in our area.