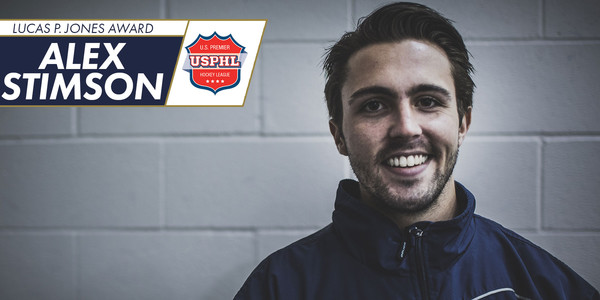 Eugene Generals Associate GM Alex Stimson has received the Lucas P. Jones Award from the United States Premier Hockey League in recognition of his media contributions throughout the 2016-17 season.

The Lucas P. Jones Award is given to a USPHL media person who best exemplifies the greatest commitment to enhancing league coverage.

With the 2016-17 season being the team's first as members of the United States Premier Hockey League, Stimson helped the franchise quickly develop a presence on the national stage while also providing unparalleled coverage of what would prove to be historic Generals season.

In addition to assisting Generals GM Flint Doungchak in a managerial capacity, Stimson curates all content for EGHN, the Eugene Generals Hockey Network. Stimson produces, directs, films and edits nearly all of the video, audio and photo content seen on the Eugene Generals' online, print and social media platforms.

Originally founded by John Strong, the current lead soccer play-by-play voice for FOX Sports, EGHN has been providing the best team coverage in all of Tier III junior hockey for more than a decade. On-demand content from EGHN is available at EugeneGenerals.com.