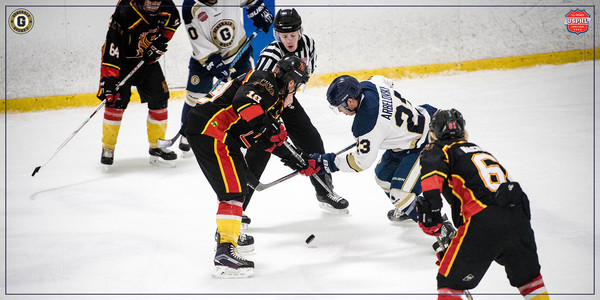 The Eugene Generals netted a 2-1 win over the Decatur Blaze during the third round of USPHL Playoffs pool play on Thursday moring, the franchise's first USPHL Playoffs win in its first season as members of the United States Premier Hockey League.

Despite earning the win, it was a nightmare start to the game for Eugene as Decatur needed only 82 seconds to take the game's first lead. Forward T.J. Dougan put the Blaze ahead after pouncing on a rare rebound surrendered by Generals netminder Christopher Alexakis to put Decatur in front while fans and scouts were still getting settled in.

Just under eight minutes after Dougan's game-opening goal, Colton Symbol scored his 12th goal since joining the Generals in January to tie the game at one goal apiece. Symbol's first, second and third efforts in front of the net were initially turned away, but the veteran forward was not deterred as his relentless effort paid off when he finally jammed the puck past Blaze netminder Adam Lindeman.

Both sides would be locked at 1-1 until the 13:33 mark of the second period when Brett Sparks gave the Generals a one-goal advantage. Sparks, who broke the single-season franchise record for goals (23) and points (53) by a defenseman, skated below the dot before snipping home a hard wrist shot through the legs of Lindeman to put the Generals ahead.

There were no shortage of high percentage scoring chances for both teams in the second and third periods, but Sparks' strike proved to be the final goal of the game as Eugene goaltender Christopher Alexakis capped off a stellar week with another highlight-filled performance by stopping 29 of 30 total shots faced, including all 17 faced in the second and third periods combined.

With the win, the Generals finished pool play in a three-way tie with the Decatur Blaze and the Jersey Hitmen for the fourth and final spot in the semifinals, however the tiebreaker left the Generals on the outside-looking-in as Decatur was awarded the last spot in the semis.

The Eugene Generals were one of six USP3HL teams vying for the USP3HL championship at the USPHL Beantown Spring Classic. The Generals earned their spot among the final six teams after winning the USP3HL Pacific Division Championship in the franchise's first season as members of the United States Premier Hockey League.