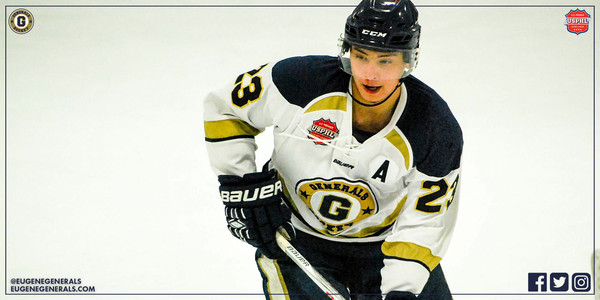 Motivated by their rallying performance in the previous matchup, West Sound began the game with two quick goals in just over four minutes from Brennan Newton and Dylan Erickson. The Generals would come to life shortly after, however, and would finish the period with four straight goals, two of which belonged to Kory Palmer.

Palmer started the onslaught at 8:48, unassisted, and scored again at 11:06 off an assist by Adam Shimamoto. Cody Arbelovsky capitalized five minutes later on the power play from Jordan Szymanski, bringing him within one goal of the franchise record for most goals in a single season. A Eugene native, Jack Geisler added on a marker of his own at 18:37 from Shimamoto and Szymanski. The end of the opening twenty minutes was the respite West Sound needed, and Eugene took a 4-2 advantage into the intermission.

Nash Berkowitz caught himself a slashing penalty early in the middle frame, but that didn’t stop the Generals, as positioned at the right circle, Josh Hawn flicked a shot over the shoulder of Warriors’ goaltender Jeremiah Levitt into the netting. The shorthanded tally was unassisted and came at 2:55 to put the Generals ahead, 5-2. West Sound answered at 7:48 with a scrambling goal by Henry Waite from Hank Cribbs, but that, too, would be negated a few minutes later. Cole Bloemer, who grabbed two goals in Friday’s matchup, got in on the scoring at 9:56 off an assist by Hawn, which would signal the end of the night for Levitt. The scoreboard read 6-3 in the Generals’s favor as the period drew to a close.

The final period started slowly, with not much action through nearly eight minutes. A bad giveaway in the slot by the Generals pushed the puck straight to Christopher Mitchell’s stick, who wasted no time in burying a shot past netminder Jamie Frantz. Mitchell’s tally cut Eugene’s lead to 6-4 with 12:14 remaining.

It would also be West Sound’s last goal of the night. At 13:55, Frazier Mohler sunk one behind backup goaltender Chris Shoul from Palmer. The landmark moment came almost two minutes later when Arbelovsky scored once more, granting him sole possession of the franchise record. Bloemer tapped a timely pass across the crease to Arbelovsky, who backhanded the puck into the net to earn lucky number 47.

Palmer completed the hat trick and the rout with 54 seconds remaining, sealing the convincing 9-4 victory.

Levitt made 18 saves on 24 shots, and Shoul stopped 20 of the 23 shots he faced in relief. Frantz fought off 12 of 16 shots. West Sound had no power play attempts, whereas Eugene went 2-for-2.

Tonight concludes the Generals’ regular season, bringing them past the 70-point mark for the third time in franchise history (76: 2008-09 and 2009-10). They will play the first of their 2017 USP3HL Playoffs appearances on Tuesday evening at 7:30 p.m. at The Rink Exchange against the Seattle Ravens. Tickets are available for purchase at EugeneGenerals.com or at the Eugene Generals Box Office prior to puck drop at The Rink Exchange.