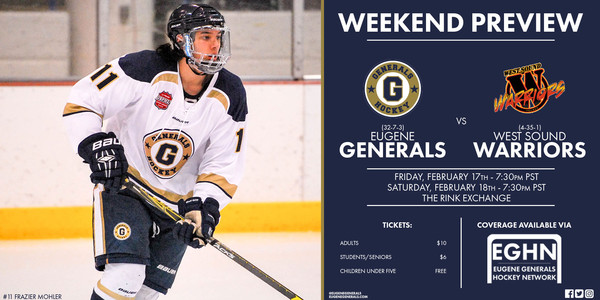 The Eugene Generals (32-7-3, 67pts) wrap up the regular season this weekend with a two-game series against the West Sound Warriors (4-35-1, 9pts) that is scheduled to be played on Friday and Saturday at The Rink Exchange in Eugene, Oregon.

The Generals enter the regular season's final weekend boasting one of the USP3HL's best point totals and will have a chance to cross the 70-point threshold for just the third time in franchise history (76: 2008-09, 76: 2009-10). To date, only two other USP3HL teams have reached the 70-point mark (Florida Jr. Blades - 86, Charlotte Rush - 71) and the Traverse City North Stars still have a chance to hit 70 points as well (66 points with three games remaining).

Personal records will also be on the line as forward Cody Arbelovsky will head into the season's last two games needing just one goal to tie Michael Frei (2007-09) for most goals in a single season in Generals franchise history (46: 2008-09).

The Generals and Warriors last faced off just two weeks ago, a two-game series in Eugene that was swept by the Generals behind wins of 4-1 and 8-3. This weekend's series between the two teams is a makeup of a previously postponed series that was originally scheduled for December 2-3, however ice storms and inclement weather across the Northwest led to the Warriors cancelling their travel plans.

Following this weekend's regular season finale, the Generals will quickly turn their attention back to the Seattle Ravens as the two teams are scheduled to meet in the USP3HL Pacific Division Championship Series, a best-of-three series that will determine the Pacific Division's representative in the USP3HL Playoffs.

The schedule for the 2017 USP3HL Pacific Division Championship is listed below:

Tickets for all three games are available now at EugeneGenerals.com.

In his second season with the team, the veteran scored his fifth goal of the season last weekend as the former defenseman has moved back to his more customary forward role. Since the start of the new year, Palmer has three goals and two assists in five total games when playing as a forward.

In his first season with the Warriors, the Washington native has made steady progress throughout the season helping lead a young West Sound roster. Slater has 4 goals and 10 assists in 37 games played this season, however only two points have come against the Generals (ten games - two assists).

Zecchetto has been a vital part of perhaps the USP3HL's best three-man rotation of netminders, but his play over the second half of the season has rivaled some of the league's best. Since the start of December, the Italian is 5-1-0 with a 2.17 goals against average and a .917 save percentage.

On his third stop in the USP3HL this season (Traverse City North Stars, Daytona Racers), the Quebec native has been one of the few bright spots for the Warriors down the stretch of the season. Lacharite has already stunned the Generals once this season as he stopped 38 of 39 shots faced in West Sound's 2-1 win over Eugene back on January 13th.

What To Watch For

Arbelovsky One Away From Frei's Record

With two games left in the regular season, second year forward Cody Arbelovsky is on the verge of making Generals history. The Alaskan has scored 45 goals so far this season, just one behind Michael Frei's mark of 46 (2008-09) goals for most in a single season in franchise history. How has Arbelovsky fared against the Warriors this season? He's scored in seven of eight games while tallying 15 total goals against West Sound during the 2016-17 campaign. Earlier this season, Arbelovsky broke the Generals' single-game franchise record for goals scored with six against the West Sound Warriors on September 23rd.

After this weekend's matchup with the Warriors, the Generals will have a quick turnaround as Game One of the USP3HL Pacific Division Championship Series against the Seattle Ravens is scheduled for Tuesday, February 21st at 7:30pm at The Rink Exchange in Eugene, Oregon. While the Generals will be aiming to exit this weekend with momentum on their side, they'll also hope to be doing so with an injury and suspension-free roster. A total of 91 penalty minutes were dished out two weeks ago in the most recent two-game series between these two teams.

Saturday's game will mark the final regular season game on home ice for five Generals players - Josh Hawn, Kory Palmer, Brett Sparks, Colton Symbol, and Christian Zecchetto - who are all currently in the midst of their final junior-eligible seasons. Hawn, Palmer and Sparks are each in their second full season with the team, Zecchetto joined the Generals before the beginning of this season and Symbol was a mid-season acquisition from the Tri-City Outlaws.

The Generals and Warriors face off on Friday, February 17 and Saturday, February 18th at The Rink Exchange in Eugene, Oregon with both games beginning at 7:30pm PST. Tickets are available at EugeneGenerals.com or at the Eugene Generals Box Office, located at The Rink Exchange. Live video coverage of both games will be available via the Eugene Generals Hockey Network (EGHN) starting at 7:00pm PST. Live stats will be provided at USPHL.com while updates will be provided via Twitter.